Prairie School, named after a style of architecture popularized in the late 19th and 20th centuries by Frank Lloyd Wright, is the highly-anticipated bar from Jim Meehan (of NYC’s PDT fame) and Heisler Hospitality (Bad Hunter, Lone Wolf, The Revel Room, etc.) that opened at the end of September. Citing the design style as a reference point, the bar reflects a combination of Midwestern and Japanese influences in its offerings.
The origin story for this endeavor starts at Tokyo’s Bar Radio in 2014 with the meeting of Meehan and restaurant designer Kevin Heisner, who, along with Matt Eisler, are the duo behind Heisler Hospitality.

As Meehan recounts, "It's a tiny, jewel box of a cocktail bar located near the bustling shopping district in Omotesando. There are usually no tourists there, so Kevin overheard me speaking (in English) about the bar industry and introduced himself as a Chicago bar owner. We exchanged information and have stayed in touch over the years." After an introduction to Eisler along the way coupled, with mutual respect and admiration for each other's bars, the trio decided to work together earlier this year.
"To complement and distinguish ourselves from the Bauhaus influences of the Ace Hotel, while tapping into the architectural/design legacy of Chicago, Matt and I came up with the Prairie School concept as a great way to channel food, beverage and hospitality through the lens of Wright and his colleagues," Meehan states. "We all feel like now's the time for Chicago to claim its seat as one of the best places to eat and drink, and this concept helps us tell that story through a legendary cast of characters, who fought off neoclassical impulses of late 19th century builders in Chicago to create a uniquely modern style that suits the Midwestern prairie."

Prairie School's beverage menu features a rotation of 12 cocktails, beer, wine and a few non-alcoholic drinks. In addition, there's a hyper-seasonal menu of specialty drinks that gets updated approximately every two weeks. Though Meehan views all of the menu items as his children, in a Sophie's Choice-esque scenario to highlight his favorite cocktails, Meehan feels that the drinks that best embody the story of the bar are the whisky highball, "served from a new Hoshizaki draft system into ceramicist Phil Kim's unique tumblers," and the lemon ice, a variation on the French 75 inspired by Johnnie's Beef in nearby Elmwood Park, "in which we combine local vodka and sparkling wine with lemonade under a bed of pillowy shaved ice." In addition to the aforementioned drinks, Meehan would recommend the gin blossom—a variation on the martini made with a Kansas City gin—to first-time guests. 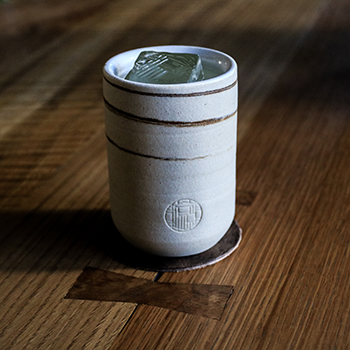 "We want to tell the story of the Midwest through our ingredients, but like Wright, we want to incorporate technology that helps us prepare delicious drinks for our guests."
[Pictured on the left is the Whiskey Highball with Suntory Whisky Toki and sparkling water. (Photo Credit: Jackie Gillum.)]
Meehan will oversee the bar program from afar in his home base of Portland, Oregon. Managing the day-to-day operations of the bar is Kristina Magro, named one of Chicago's Best Bartenders by RedEye Chicago.
The bar snacks were developed by Jared Wentworth, formerly of Michelin-starred Longman & Eagle. As with the beverages, the food is similarly a combination of the bar's dual primary cultural influences, perhaps best showcased in a dish of fried cheese curds with bonito flakes, scallions and togarashi aïoli.
Looking ahead, Meehan says that "Prairie School is a heady concept that will evolve for years to come as we ingratiate ourselves with the ever-changing neighborhood and city at large. While not a literal school, we hope our beverage program's values celebrating the best wines, beers and spirits in the Midwest, as well as social priorities—our collective 'school of thought' as a company—will resonate near and far, while positioning Chicago as one of the most exciting places to eat and drink in the world."
Prairie School opens daily at 5:00 p.m. with table reservations available via Reserve. Bar seats and additional standing tables are available to walk-in guests on a first-come, first-served basis.
Hero image courtesy of Prairie School. (Photo Credit: Anthony Tahlier.)