At two-Michelin-starred SingleThread in Healdsburg, California, it’s a family affair—truly.

Headed up by chef Kyle Connaughton and his wife/horticulturalist extraordinaire, Katina, not only is the property home to the restaurant and the garden that feeds the restaurant, but it’s also home to their two children, as well as Katina’s brother.

“We had a very long runway prior to the restaurant opening; it established that feeling organically,” says Kyle. “Our development kitchen was actually in our home. Everyone worked in our home, many of them for up to a year.”
The Connaughtons met nearly three decades ago in 1992 in the suburbs of Los Angeles. “It was a classic love story of two young teenagers locking eyes at a punk rock show,” recalls Katina. “We’ve had that kind of cosmic connection ever since.” The stars aligned when Kyle’s high school was closing and all the students had to transfer; Kyle requested that he be enrolled in Katina’s school while sleeping in a friend’s spare room.
The couple got married and started a family at a young age and traveled extensively, first moving to a rural fishing village in Hokkaido where Kyle got a job working with Michel Bras. While in Japan, Katina studied sustainable farming techniques. Then the Connaughtons moved to Bray, England, as Kyle landed a chef position at The Fat Duck.
The dream, however, was to always move back to California to open a farm and restaurant.
“Though the timeline was long, the vision started in our late teens and early 20s,” says Katina.
Located on five acres in Healdsburg, the property also features a greenhouse, chicken coops, olive trees and bee hives. The restaurant officially opened at the end of 2016, and earned two Michelin stars the following year. 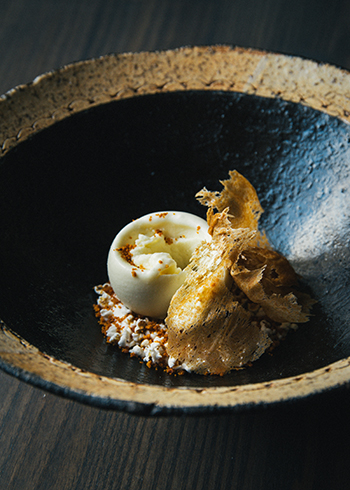 “For us, we’re really just getting to the starting line,” says Kyle. “We moved to Sonoma County without a property or an investment group, per se. We had to seek out properties for the building and the farm ourselves. That in and of itself took a few years. We closed on December of 2014 and then we didn’t open until December of 2016. We spent two years constructing and getting the crops in and mending the soil. The big challenge was the amount of time that it took to put all of this together.”
At the restaurant, Kyle oversees recipe and menu development while Katina takes charge of the farm; she is the yin to his multi-course tasting menu yang.
“The challenge going forward is that we do have all of these pieces that are very symbiotic in their nature,” adds Katina. “The farm doesn’t produce anything outside of this restaurant—they rely on each other. It’s a constant maintenance of communication and planning.”
The Connaughtons note that communication is a driving force not just between themselves, but with the entire SingleThread Farms team. “It’s so important that the communication is disseminated to our team—both culinary and the farm,” says Kyle. “The current messages are getting across, like what we’re planting and harvesting. It’s very interesting to have an entire group of people to be in on your communication.”
Though the pair always strives for balance, they find that there generally isn’t a separation between work and home life.
“Our vision for the restaurant and inn was always to be a really comfortable space and experience,” adds Kyle. “We want the guest to feel a part of someone’s home as if they’re having a dinner party—it’s a real authentic sense of family. You have to treat your work as your home, which we do.”
Everyday, the Connaughtons have family meal with their daughters at precisely 4:00 p.m—yes, they work there—stating that the boundaries between work and home are now blurred, and that was by design.
“Our kids are grown up,” adds Katina. “This is our baby now.”
Should any chefs look to work with their partner, Kyle and Katina advise respecting the areas of expertise of the individuals to collaborate well. “Our areas are very different, but we’re each other’s silver linings,” says Kyle. “There are checks and balances between those two sides that help us. We have the mutual respect for each other and what each other does, and have a bit of an outside perspective of each other where we can point things out or ask more probing questions to push each side further.”
“Half of our team are couples here as well—more than I’ve ever seen before,” shares Katina. “It helps that family feel. And if you lose one, you actually lose two. But that comes with the territory.” There are roughly 56 people on staff currently at SingleThread.

“We’ve evolved, but we’ve evolved together,” continues Kyle. “Who we’ve become as individuals and what we do individually is supported collectively. It’s so compatible. If anything, it’s strengthened our relationship.”
Hero image courtesy of Roman Cho. All other images courtesy of Eric Wolfinger.