With a rise in demand and premiums paid nowadays for ‘terroir’ wines – hallowed drops that can be traced back to their place merely by the character they exude - liberties were almost bound to be taken with the ‘single vineyard’ term. I’m certainly finding it used more and more in marketing paraphernalia. I’ve even seen ‘single vineyard’ mentioned on the front labels of large production Marlborough Sauvignon Blancs coming from vast, alarmingly young vineyards with no track record to speak of. When taken to its ultimate extreme, the words ‘single vineyard’ should conjure images of miniscule parcels of near mono-geological turfs that have long been married to a single varietal soul-mate, perhaps Romanee-Conti (1.8 ha), Le Montrachet (8 ha) or Clos Sainte Hune (1.67 ha). Stretching the definition further, vineyards in Bordeaux such as the 11 hectare Petrus property in Pomerol could be so classified, consisting of a predominance of pure clay planted to nearly 100% Merlot but for an outcropping of iron and that smattering of Cabernet Franc. But what about larger and more varied vineyards? How far can we go - Chateau Lafite-Rothschild, spanning 100+ hectares, 5 grape varieties, multiple soil types and vines at varying states of maturity? Far from a single vineyard taste, at the other extreme consumers are drinking something closer to a mixologist’s cocktail under a generic vineyard brand. So what is the definition of a ‘single vineyard’? Is there a limit on how big it can be? Is there an implied uniformity of terroir and vine in these words, and to what extent is that even possible? Until EU bureaucrats get hold of it, it appears the definition of ‘single vineyard’ is likely to remain shades-of-grey. In my book however there should be no point for any reputable winery to bottle a wine classified as such if not to produce a thoughtfully delineated example of elevated quality that stands apart from that which surrounding vineyards can achieve and expresses something, well, singular.

I was given cause to consider the single vineyard conundrum last spring during a tasting I was conducting in Singapore with Australian wine journalist and communicator James Halliday. We were discussing a line-up of Australia’s greatest Shirazes and of course the two most famous examples were brought forth for comparison: Penfolds Grange and Henschke Hill of Grace. “On the one hand,” I pointed out, “we have a multi-regional blend produced to a stylistic expression, while on the other Australia’s greatest single vineyard wine.” “Ah,” Halliday muttered on the quiet to me, “but is Hill of Grace truly a single vineyard wine?” And, with a glint in his eye, he simply left it at that as the discussion moved on.

Though I wasn’t prepared to agree with him just yet, Halliday’s mercurial aside had got me thinking. I’d visited Hill of Grace before and was aware of its size and that it is in fact separated into distinct blocks of varying soils, vine ages and grape varieties. Every year these clearly defined blocks are vinified separately, as though each were a single vineyard, before trials and a final blend is made prior to bottling. To what extent does this blending of separate Hill of Grace component blocks accentuate or mitigate quality and a unique / singular expression?

Single vineyard or not, Hill of Grace is the quintessential Eden Valley Shiraz. Driving from the Barossa Valley up into the Eden Valley, the differences between the two areas are striking and it’s difficult to understand how they can be considered to be the same region (as they often are), apart from plain proximity. This area to the east of the Barossa is peacefully rural and altogether a lot less developed, hosting vast stretches of unscathed scrubland interspersed with gum trees and rugged, rocky hilltops. But the major point of departure is altitude – the warmer flatlands of the Barossa valley floor develop about mid-way through the town of Angaston into gently rolling, notably greener hills, soon giving way to the steeper slopes of the Barossa Ranges. Generally the region sits at around 400 to 500 metres above sea level compared to the Barossa Valley at around 200 metres. This makes the Eden Valley considerably cooler than the Barossa, tending to yield more firmly structured Shirazes with taut, muscular fruit in youth and often with a faint, fragrantly herbal, sage-like lift to the aroma/flavour profile. 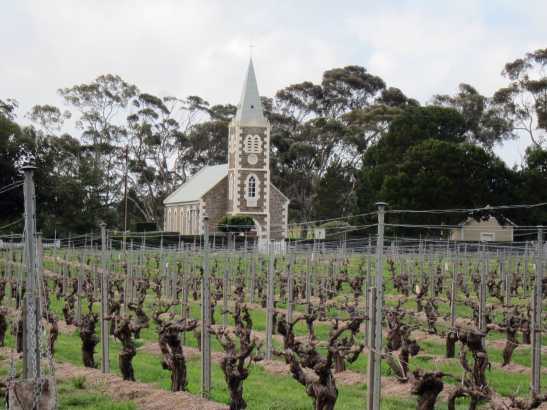 The land where the Hill of Grace vineyard is now located was first planted to vines sometime before 1860 by a local farmer known as Nicolaus Stanitzki, an ancestor of current caretaker Stephen Henschke on his grandmother’s side. Located in the Keyneton township, it sits across from the Gnadenberg Church, an original and well-maintained 150 year+ Lutheran place of worship where the Henschkes are members to this day. In fact ‘Hill of Grace’ is a translation of the German word Gnadenberg, a region in Silesia, Germany. Once a bustling centre of the burgeoning community this part of the Eden Valley is now relatively remote with a bucolic and, yes, spiritual serenity about it.

Johann Christian Henschke, Stephen’s great, great grandfather, arrived from Germany to South Australia in 1841. He was known to have planted a small vineyard in the 1860s with his son, Paul Gotthard, most likely purely for production for the family at that time. Then in 1873 Paul Gotthard took over his father’s estate and in 1891 he purchased the piece of land near Gnadenberg Church, which would later become known as the Hill of Grace vineyard. In 1914 his son Paul Alfred took over the estate and in 1950 one of Paul Alfred’s sons, Cyril Alfred, the only child amongst 11 siblings to take an interest in winemaking, took charge of the management of the vineyards and winery. Today the Hill of Grace vineyard is owned by Audrey Henschke who was married to Louis Edmond (a son of Paul Alfred). It is managed by Cyril’s son Stephen Henschke and his wife Prue, who have a sharecropping agreement with Audrey and her children.

The first ‘single vineyard’ bottling of Henschke’s Hill of Grace Shiraz was done by Stephen’s father in 1958. Cyril Henschke could be considered something of a visionary with his concept to move away from fortified wine production, as was popular in his time, and focus on the development of single vineyard wines – first Mount Edelstone in 1952 followed by Hill of Grace six years later. But if he was the idea-man behind Hill of Grace’s rise to glory, Stephen and Prue have to be credited for the hard graft behind the execution of its continual improvement and intrinsic greatness today. The amount of research, experimentation, massal selection, plantings and improvements instilled by this dynamic duo is simply astounding. Their positions as caretakers for the Hill of Grace national treasure is taken very seriously and includes painstaking changes amongst the ancient vines such as converting the more vigorous vines to vertical shoot positioning or Scott Henry trellising and the sewing of cover crops. The wines are made as naturally as possible and while admirable pursuits such as lower sulphur levels in the past has resulted in some incidences of brettanomyces, the recent vintages are remarkably pure and free from such blights – in many ways, better than ever. 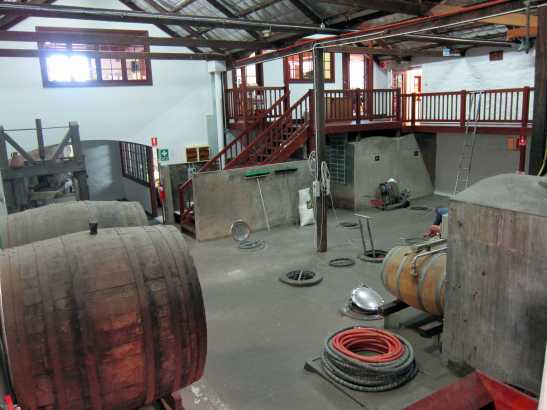 The Hill of Grace vineyard is about 8 hectares in size, planted predominately but, rather surprisingly, not exclusively to Shiraz. Shiraz accounts for about 7 hectares separated into blocks according to vine age and soil type, but there are also small blocks of Mataro, Semillon and Riesling. The white grapes are used in the Eden valley varietal wines. The Mataro usually has problems ripening sufficiently though occasionally it is included in the Hill of Grace blend.

There is also a 7th block of Shiraz planted in 1989 known as Post Office Block Young, which is destined to one day make up part of the Hill of Grace blend but thus far it has not been considered worthy of inclusion. 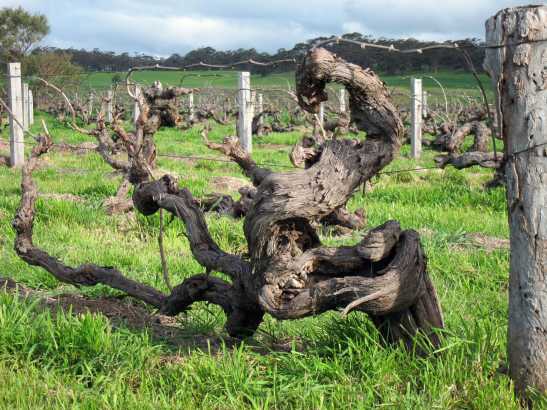 A 150 Year Old Vine from the Grandfathers Block

On a  visit to Henschke’s Hill of Grace vineyard with the estate's viticulturalist Prue Henschke and winemaker Paul Hampton as my guides, Prue began by taking me through the differences she has noted in the soil compositions of the separate blocks. The Grandfathers block, for example, is planted on a deep silt soil profile mixed with some of the red-brown earth that extends more deeply into the Church block, and it possesses good water holding capacity. At 150 years+ of age, the Grandfathers’ vines are simply a wonder to look at: thick, twisted, gnarled stumps that awaken like Lazarus each spring, yielding complex, singularly characterful fruit – exotic as winemaker Paul described it. Consisting of such senescent, dry grown, pre-phylloxera vines on their own rootstocks, this block is so uniquely special it surely cries out to be its own single vineyard? Particularly when it is contrasted against say the larger House block, planted nearly 100 years later on a thinner, far less vigorous soil and which tends to ripen considerably earlier than Grandfathers, yielding notably smaller bunches of tiny berries by comparison. Surely to blend the two would be the vinous equivalent of mixing chalk with cheese?

But, as initially alluded, the pursuit of producing a single vineyard wine in its truest sense is a quixotic one. Varying soil types, vines of varying ages and clones, and different sectional ripening times occur in every “single vineyard” of the world. And though there are examples of those that are harvested in one fell swoop, all fermented in one batch and thus bottled without any blending components, this method doesn’t make them truer single vineyard wines. But where does one draw the line? 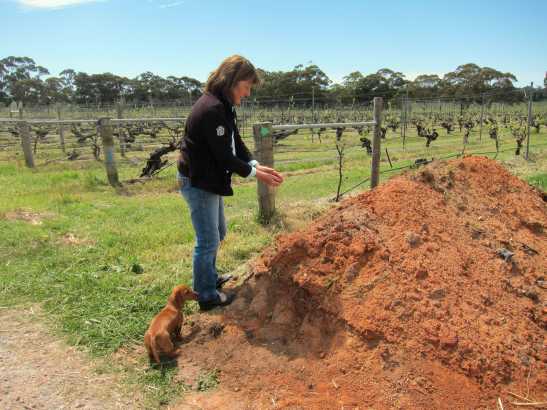 Henschke’s winemaker Paul Hampton went into some detail with me during  my visit regarding how each of Hill of Grace’s blocks produces fruit with definable characteristics that are totally unique to one another and yet make up integral parts of what has come to be singularly known as “Hill of Grace”. All taken into consideration, I’m not entirely sure if Henschke’s Hill of Grace is Australia’s greatest single vineyard wine. Supporting arguments could be made for looking at the 6 component blocks as single vineyards themselves, physically and historically distinct from one another, each with their own truly special wine to give. Or they could just as validly be construed as they currently are - organs of the same body, each vitally essential to the expression of what has come to be uniquely known today as “Hill of Grace”. Well, single vineyard or not, historically, intrinsically and metaphysically, it sure is great wine.

Some of the historical references in this article come from the booklet, “Henschke: 40 Years of Hill of Grace 1958-1998”, compiled and written by Heather Britton.