Wild boar. Deer. Bobcats. Coyotes. Red-tailed Hawks. These wild creatures out-number humans in this part of the Cienega Valley appellation of California. Eden Rift lies in the shadow of the Gabilan Range, which looms over and punctuates the landscape of San Benito County, Monterey County, and includes the Pinnacles National Park. “Gabilan,” an older rendering of the Spanish word, gavilán, means sparrow hawk, and indeed, as I make my way through this untamed, remote winegrowing region, I pull over several times to observe raptors flying overhead, landing here or there atop old barns folded over by age, or on feed silos in golden fields laid flat in spots by meandering Angus-laid trails.

I have come to visit Eden Rift Vineyards, just a few miles as the crow flies from Calera, as I’ve heard winemaker Cory Waller is producing limestone-born Pinot Noir and Chardonnays on an historic site. Though he is working with more recent plantings, a Zinfandel vineyard, planted in 1906, still thrives (own-rooted, original plantings) just outside the estate’s main residence. But before I meet up with Waller, I’m introduced to Eden Rift’s owner, Christian Pillsbury. 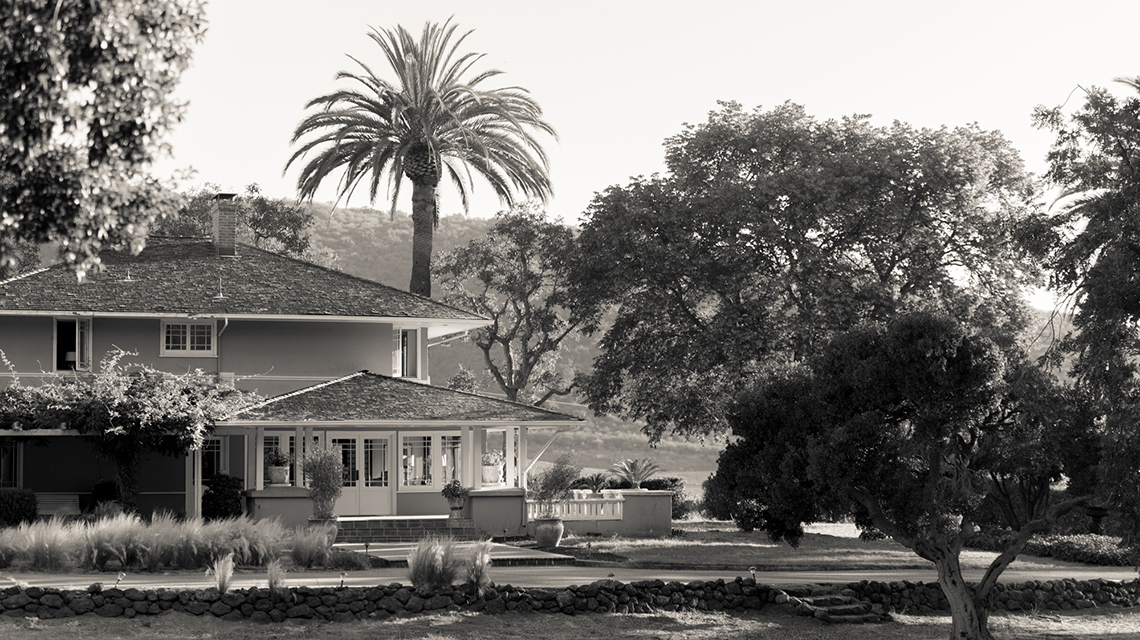 At first, Pillsbury’s sophisticated, cosmopolitan demeanor seems out of place in this rugged, rough-and-tumble landscape. But he’s soon offering me a seat at a long wooden table inside the Dickinson House, built the same year the Zinfandel block was planted, and where he presently resides. A native of San Francisco, he wears a San Francisco Giants baseball cap while he quietly reads me passages from Steinbeck’s East of Eden. An ardent lover of early California history, he surrounds himself with rare, historic documents and art from an era with which he feels a close affinity. “This house and this land has passed through various courageous, hard-working hands. It’s daunting to walk lockstep through history with these earlier pioneers. I’m just keeping my head down, trying to restore this property and vineyard mindfully so that it can reveal all of its historic and natural glory.”
READ MORE: Get to Know Margareth Henriquez, President and CEO of Krug 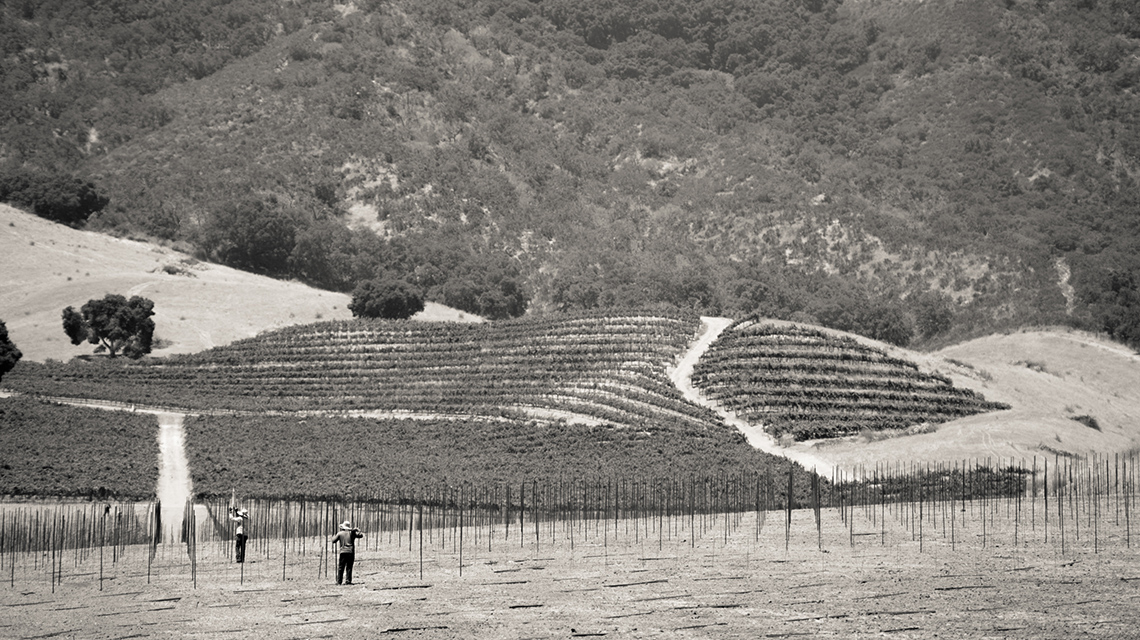 Wiry, tall and affable, Pillsbury is soon driving me around the property, up and down steep hillsides, some terraced with old plantings that were recently grafted over to Pinot Noir and Chardonnay. At one point he pulls the truck over, and we look out at what appears to be a snow-capped mountain just across the way. “That’s a limestone outcropping up there,” he says. And indeed, it’s Pillsbury’s inquisitive nature that drove him to study the soil profiles throughout the estate before purchasing it earlier this year. "This isn’t fertile land. There’s a dolomite quarry that runs along our property, limestone out-croppings running throughout, unforgiving calcareous and granitic soils with swaths of sand and loam snaking across the expanse of the vineyard... It’s a challenging landscape, but Pinot Noir and Chardonnay express themselves so purely and energetically here."
When we arrive at the white-wine barrel room to taste, Waller awaits us. Unassuming and possessing a relaxed, laidback attitude, Waller thieves nearly chartreuse-hued Chardonnay out of mostly neutral oak vessels. The last time I saw Chardonnay this beautifully colored was when I tasted Ceritas wines for the first time. On the nose, Waller’s 2016 Chardonnay is an arresting saline beauty with clearly delineated notes of Thai basil, umami and white peaches. On the palate, it’s vibrant with a bracing acidity and a long, clean finish.
I have to step back for a moment and re-calibrate everything I think I know about the Cienga Valley, which is—well—very little, except for the definitive wines made in those early years by Josh Jensen out at Calera. I’ve long viewed that gem of a winery as somewhat of an anomaly. I assumed that there was nothing else out here in this solitary appellation, but its history for winegrowing dates back to the late 1800s. Two of the various hands through which this land has passed belonged to Theophile Vache, (I know, great name, right?), a wine merchant from Bordeaux who, in 1849, homesteaded here and planted a small vineyard, including Pinot Noir, or, as it was called back then, Black Pinot. In 1883, the property was acquired by William Palmtag, then the mayor of Hollister, who planted a few European varieties, the results of which were wines that won several international awards at the time. But in 1906, the property took a more profound turn under the direction of Captain Jules Jacques St. Hubert, a winemaker, and John Dickinson, a successful grain broker from Chicago. St. Hubert stayed around for a while. When he left, Dickinson chose to place his own aesthetic imprimatur on this otherwise still-veiled place. He did so by commissioning Burley Griffin, a partner of architect Frank Lloyd Wright, to build the Dickinson House, which still stands today, and possesses a regal bearing as only truly old homes can. 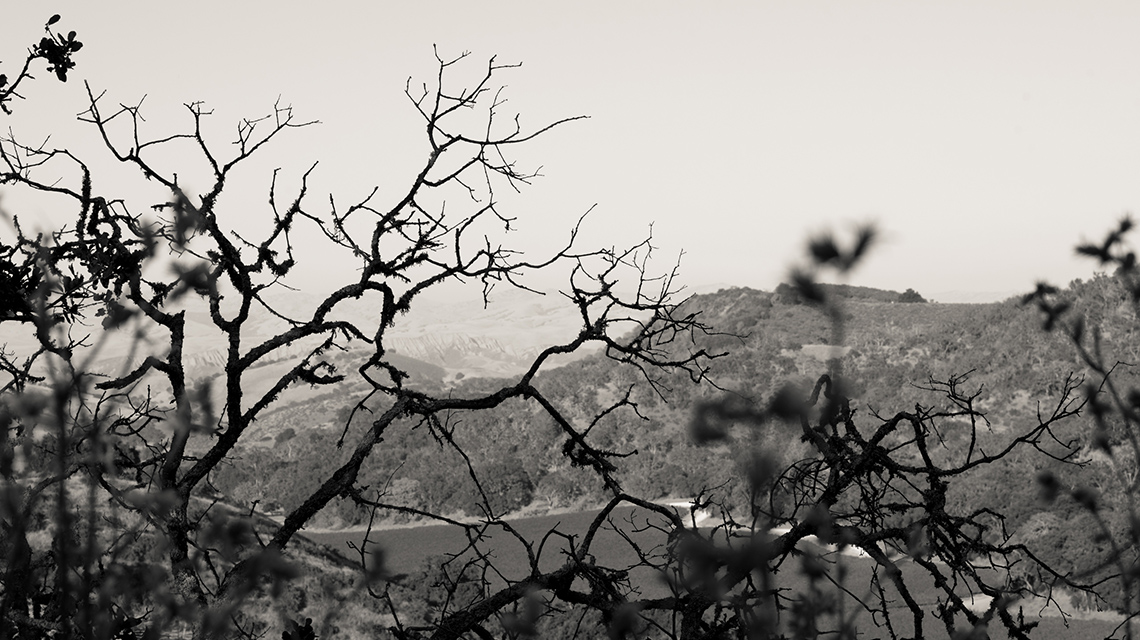 Later in the afternoon, Pillsbury shows me the front page of the San Francisco Chronicle, which he has had framed, from the calendar year 1933. The headline: “Prohibition Has Ended.” It was in that same year that Edwin Valliant, Sr. (What is it with these great names?) purchased the property and stewarded it for a few years before selling it to Hiram Walker (Yes, that Hiram Walker—the spirits house), where the Valliant wine label was born. For over 40 years it remained in Walker’s hands before being purchased in 1988 by Joseph Gimelli, an Italian immigrant who anointed the property “Pietra Santa.” The Blackburn family then purchased the estate in 2006, and it remained in their hands under the Pietra Santa name. They set about converting many of the plantings from Italian varieties to Pinot Noir and Chardonnay, but under Pillsbury the plantings have become further delineated—down to single rows. For a city-dweller, Pillsbury is adept as a winegrower, albeit a nascent one. He can tell you what’s planted where, down the soil profiles, clone selection, trellising system, canopy-management choices, etc. He’s a quick learner, and has invested tremendous resources in strengthening the quality of the vineyard.
Pillsbury’s natural propensity towards farming may very well be informed by his long-time love affair with all things enological. A young 40 years old now, Pillsbury began studying wine in his early 20s. “My first apartment in San Francisco was basically a coffee table, a chair, and then lots of wine bottles on the floor.” When he wasn’t stocking boxes at a wine store where the worked, he was studying up on wines at home, reading everything he could get his hands on about the early wines of California and the greatest benchmark wines of the world.
Later, his love of wine led him to successful stints at DFS (Duty Free Stores) where he managed successful, international wine programs; at Applied Wine, a start-up he founded in Hong Kong, and more recently, at Coravin, where he helped introduce the wine preservation tool across 11 countries in the Asia Pacific.
His understanding of wine is especially evident as we taste through the Eden Rift Pinots. Waller, who was already working at the estate when it was purchased, stayed on at Pillsbury’s behest. “Cory worked at Chalone. He worked for Tony Soter, Bergstrom and J.K. Carriere in Oregon. He was at Neudorf and Martinborough in New Zealand. He understands and respects these varieties.” And it’s a good thing it’s Pillsbury who is telling me about Waller’s accomplishments, because Waller is a man of few words. I’m blown away by the texture and savory aspects of his Pinots, off-set as they are by a fresh, lively fruit presence, one that is never cloying. I compliment him on his efforts. He smiles a little and then responds, flatly, “I just try not to screw up.” When I prod him a little further, he adds, “I think the ‘rift’ in our name is incredibly suitable. To the east we have the warmer inland influence, the North American plate, and decomposed granite. To our west we have the Pacific plate, a coastal influence with daily offshore winds like clockwork during the spring and summer months, and sedimentary soils. Those same winds allow us to be less reliant on a stronger diurnal shift for cooler nights. Together, this dichotomy of the two gives us combining characteristics that are ideal soils and climates for growing excellent Pinot Noir and Chardonnay. There’s a reason Pinot was planted here 80 years ago; it truly is a hidden gem that I hope we can open up to the wine world.”
When I arrived here in the morning, it was a cool, clear day. By noon, the property was hot and still. By 3:00 p.m., a gentle, cool wind began to descend upon the estate from over the range, the Pacific—just 18 miles away—making its presence known. Always curious about the diurnal swings in a region, I have asked in advance if I can stay overnight on the property, to fully immerse myself in its terroir.
I leave my window ajar inside the guest room at the Dickinson House and am grateful for the down comforter, as by the time I turn in, the temperatures have dropped dramatically. The distant calls of coyotes float through the night air. A chorus of crickets provides rural white noise. A long-time John Steinbeck fan, I think of him, all those years ago, exploring the Gabilan Range. A native son of nearby Salinas, it was near here that he penned East of Eden, in part the inspiration of the Eden Rift name.
“What good is the warmth of summer, without the cold of winter to give it sweetness,” he once wrote.

All photos courtesy of  Jimmy Hayes.