Cane from chef Peter Prime earned the Bib Gourmand designation in the MICHELIN Guide Washington, D.C. 2020, but this isn't the first time the chef has garnered such an accolade. Just last year Prime was the chef at Spark, which was described by inspectors as "the lovechild of a good old-fashioned smokehouse and Caribbean spot." But at the end of 2018, Spark's owners shifted the business to a catering-only operation.

Though I'm sure it was disappointing to hear, Prime now thinks of it as good timing. "The space became available just when I was hearing that we were probably closing at the end of the year," Prime says. "It was just a great opportunity. I'd always hoped to open a space, but I didn't think I would be able to be there and be as involved as I [am] able to [now] because we actually closed as a restaurant at Spark."

This time around at Cane, Prime is in charge, sharing ownership with his sister, Jeanine, and her husband. "They help with all of the stuff that I'm really horrible at," he says, which means pretty much everything outside of running the kitchen, such as design, managing the books and other administrative duties. "It's amazing. It's really humbling, really gratifying, to be able to do a restaurant and see people enjoy it," Prime shares. "It's humbling to do that with your family and the food that you grew up on."

The food that the Primes grew up on hails from the Caribbean island of Trinidad and Tobago, and the restaurant's name is a reference to one of the main crops of the region. "The name says Caribbean street food, but it goes a bit beyond that," Prime says. "It is a lot of Caribbean classics. Stuff that I eat at home. Stuff that people from around the Caribbean will know and eat at home. I bring my experience and sensibilities from cooking to the classics I grew up with and really enjoy."

Prime has lots of experience cooking at various top restaurants, but his food at Cane is yet another phase in his growth as a chef. "[My style of cooking has] kind of always been changing. This is sort of the first time doing this for me. It's just been a really interesting evolution," he shares. "Right now we're playing with old and classic recipes. Different from the à la minute stuff I had been doing before. It's really interesting. I'm learning a lot." 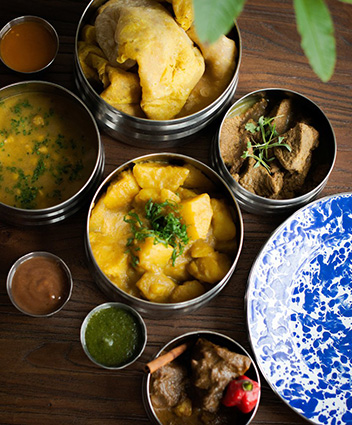 In dishes like the beef curry, that means sometimes he adds wagyu lifter cuts to the more standard chuck. ("I think it adds really delicious fat and flavor.") For his oxtails, he starts by grilling them before they are glazed with a more traditional gravy. ("But, you know, all of the flavors are sort of what I grew up with and what I expected.")

"Right now I'm exploring and rediscovering stuff that I didn't cook before but grew up eating."

And he's doing so to impressive results. "Everything prepared by the kitchen is delicious," inspectors state. "Think rich stews, perfect doubles and channa, redolent of spices and heat."

"I finally got my own kitchen and started to cook the food and the flavors that I always knew I loved and I thought were really amazing. Then seeing the response has been a really great journey," Prime says. "I've been going back to my roots and sharing it. And seeing the reaction from people who grew up in Trinidad and people who I know in the city who come and enjoy my food, and kind of sharing that with them as well, that is why I like to cook and what I love to see."

This is just the beginning for Prime and what seems to be his quest to share more Caribbean flavors with the world. He wants to start doing curated Sunday dinners, there are plans for a special Christmas menu featuring pasteles and he and his family are "hoping to have another location fairly soon." Whatever the future brings, I'm sure the buzz will follow.