A legendary figure in a land of legendary wines, Bruno Giacosa, passed away in Alba, Italy on January 22 with his daughters Marina and Bruna at his side. He was 88. Following a stroke in 2006, Giacosa had slowly retreated from the spotlight. His daughter Bruna has managed the eponymous winery and vineyard these past years.
“I have lost the most important person in my life,” Bruna Giacosa tells me by text message. “I had a special relationship with my father. We communicated with just our eyes. He was my idol.”
His funeral will be held tomorrow, January 24, at 3:00 p.m. in Neive, Italy.
Bruno Giacosa will be remembered for his keen ability to recognize the best growing sites for Nebbiolo, Barbera and the other great grapes of Piedmont. He had an encyclopedic knowledge of the cru sites of his beloved Langhe. Much of his acquired knowledge and experience would later become the inspirational basis for the Menzioni Geografiche Aggiuntive mapping work in place today for both the Barolo and Barbaresco appellations. Bruno Giacosa was among the first visionaries to understand the importance of the Langhe cru, and the unique expressions that are obtained with a single-vineyard winemaking philosophy.
With a winery in Neive (Barbaresco), Bruno Giacosa is remembered as a gifted négociant who purchased fruit for most of his career. Many of those most celebrated contacts lasted decades and were famously sealed with just a handshake. The first vintage of his Barbaresco Santo Stefano was 1964. In 1982, he purchased 25 hectares in the Falletto vineyard in Serralunga d’Alba. The celebrated Barolo Riserva Le Rocche del Falletto (red label) was recently produced in 2008, 2011 and will be followed by releases in 2012 and 2014 (to be released in 2020).
"When I met Bruno Giacosa the first time it was the beginning of the 1990s, and he had just turned in a succession of profound wines that, for the most part, proved to be legendary," remembers Robert Parker. "His Barolos and Barbarescos from 1978, 1982, 1985, 1988, 1989 and 1990 were—and remain—some of the finest expressions of Nebbiolo ever produced. We meshed well, not easy given his Jimmy Stewart (who he physically resembled as well) like stoic and quiet demeanor and my very American exuberance. I wrote a very long time ago that if there was one wine producer I would buy year in and year out without ever first tasting, it was Bruno Giacosa." 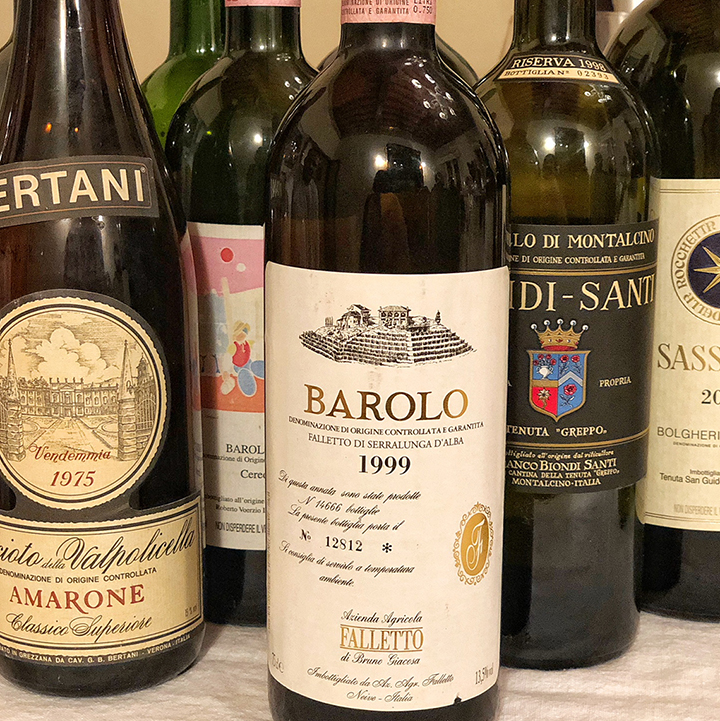 Starting with the 2013 vintage, the Barbaresco Rabajà now uses fruit from vineyards directly owned by the estate. The Barbaresco Riserva Asili (red label) was produced in 2011 but not in 2012. We should soon be seeing the release of the 2014 vintage of that wine. Giacosa’s Riservas are recognized by their red labels—they are precious bottles coveted by collectors all over the world.
Bruno and Bruna Giacosa worked with enologist Dante Scaglione since 1991. Mr. Scaglione left the winery in 2007, but returned to work for the Giacosa family again in 2011.

The wines of Bruno Giacosa will be remembered for their precision, power and elegance. Just three days before his death, I drank the white label Bruno Giacosa Barolo Falletto (pictured left) along with other Italian icons. The bottle served as a beautiful reminder of the towering status of Bruno Giacosa among the very best of Italian wine.
“Today, my father is resting in the winery with his wines,” Bruna writes, just one day before Bruno Giacosa’s remains are transported to the Neive church for his funeral.

"His contributions to Italian wine and his beloved Piedmont are beyond measure," adds Robert Parker. "I am honored to have met him, shared his wines, and remain in naked awe of what he achieved. It wouldn't surprise me if God were learning the glories of Nebbiolo from the MASTER. Rest in peace."

Hoping to spread a little holiday cheer in these difficult times, it is our pleasure to present some of the competing drawings from the 2021 Spirito di Vino cartoon competition.

In the spirit of Italian wine discoveries, it is my pleasure to present five of my favorite bottles tasted this year. These are not necessarily my highest-scoring choices, but they are the wines that stand out most in my mind as I look back over my 2021 tasting experiences.