First and foremost, my apologies for this list. If it is any comfort, you should see what's not on it (1959 Cheval Blanc, 1961 Romanée-Conti, 1990 Château Margaux, 1928 Yquem, etc). The wines that have a bit of mileage on the clock are not here by dint of age. They are here because they offered all the sensorial satisfaction of younger vintages, elevated by the ineffable complexity imbued by the passing of time. Just because it's old, doesn't mean it's great. But it does mean there is a possibility that it could leave you speechless in its presence. It is Bordeaux and Burgundy-biased simply because that's where my tastings now focus, but if I had time to taste more Napa, Mosel or Piedmont inter alia, no doubt those would reside on this list. My colleagues have far more experience in those areas. I am eternally indebted to the kind souls that shared bottles and arranged memorable evenings, especially Mr. O-G, Mr. K, Mr. D, Mr. V, Ms. M and Mr. C (not The Shamen Mr C). 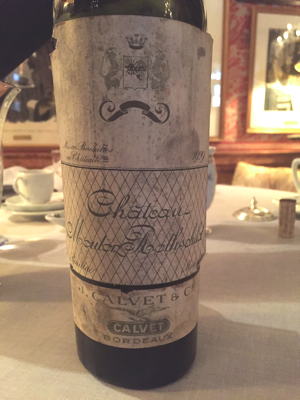 1)     1999 Romanée-Conti - Domaine de la Romanée-Conti. Having awarded the 1999 La Tâche a perfect score in 2015, in September I had the rare opportunity to taste through the complete range of 1999s from the Vosne-Romanée Cuvée Duvault-Blochet to Romanée-Conti itself. The La Tâche reaffirmed its place as one of the greatest in recent years, then came the 1999 Romanée-Conti. It took my breath away, difficult to encapsulate into words. It was so perfect that it actually made its current market price look like a bargain.

2)     1929 Château d'Yquem. I drank both the 1928 and 1929 during the last 12 months, but this was the one that I shall remember for a long time. This ex-chateau bottle exuded power and opulence. The sheer audaciousness of this Sauternes that blew my mind. No, not a live-wire like the 1945, but a Sauternes that has no limits.

3)     1961 Petrus. One of the few vintages of Petrus that I have not tasted, one that I thought I would never taste. Of course, it necessitated subsequent research of provenance, nonetheless, instinct just told me this was genuine as soon as I felt the heaviness of the bottle. It meant a lot personally, having uncovered much of its history when writing "Pomerol". Then to actually taste this legendary wine, lest we remember one that suffered a stuck fermentation, was something I shall remember for a very long time.

4)     1989 Château Montrose. For many years I have expounded the virtues of this incredible Saint Estèphe that was overshadowed by the extraordinary 1990. Now opinion has finally caught up with mine and cognoscenti realise that both vintages of Montrose are stupendous wines, albeit in different styles reflective of the vintage.

5)     1916 Château Malartic-Lagravière. The Bonnie family generously opened three of four of these gems at the Academie du Vin dinner. It was a perfect combination of Burgundy and Bordeaux, just a beautiful drink born in the same year as the Battle of the Somme. Makes you think.

6)     1929 Château Mouton-Rothschild. Wines this old can be a bit hit and miss, but when you get a bottle like this then your jaw falls to the floor. Utterly sublime, ineffably complex, don't kid yourself that after 87 years a Bordeaux cannot offer less aromas or flavors. They just do it more stylishly. Sincere thanks to the person that offered this bottle for want of sharing it with people who will appreciate it. I did.

7)     1953 Clos des Goisses - Philipponat (magnum - disgorged June '08). Quite simply, one of the most incredible champagnes that I have ever drunk. It was such a live-wire after so many years. The fact that it came from magnum and was served with the finest Beluga caviar on blinis for Sunday lunch at our host's flat in West Hampstead made it a perfect combination. Thank you Mr. D.

8)     1985 Musigny Grand Cru - Domaine Georges Roumier. Perhaps the rarest bottle on this list since only a barrel and a bit is made, and I suspect most is either drunk or being faked. Again, there was that initial concern about its provenance but it was the real deal. It is a fabulous Musigny that could bring a tear to the eye. I was lucky enough to also drink Roumier's 1985 Chambolle-Musigny Amoureuses and that was not far off this. Whilst there is a slim chance of drinking that once more, due to great quantity produced, I suspect I will never taste this Musigny again.

9)     1996 Château Margaux. The highlight of my 1996 Twenty-Year On tastings, this has to be on the list of best bottles, a tribute to the late Paul Pontallier at his very best. Perfection.

10)     1982 Petrus. Some might be surprised by the inclusion of this wine. I've often opined that it is surpassed by 1982 Lafleur, ditto the 1989 and 1990 Petrus. One bottle of 1982 Petrus that I drank in 2016 reaffirmed my view. However, this was a MAGNUM and it was astonishing in terms of how much distance it put between itself and bottle format. Proves the maxim about large formats. 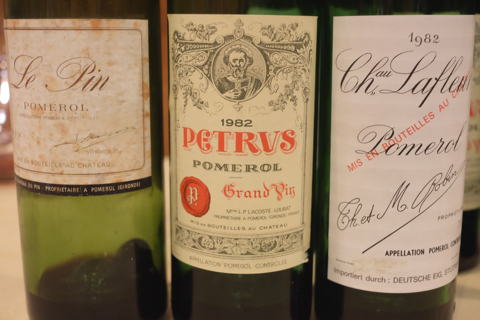 11)     1971 Grands Echézeaux Grand Cru - Domaine René Engel. I adore this vintage in Burgundy and this flirted with perfection. I recently rued how much Burgundy is being consumed so soon after its umbilical cord has been cut. I wish they could just have a sip of this elixir to experience Pinot Noir at its lofty peak.

12)     1978 La Tâche - Domaine de la Romanée-Conti. This was the first time I have ever tasted this and it was everything you could dream of. I might even prefer it to the 1978 Romanée-Conti and that is something I thought I would never be able to write.

13)     1989 Château Haut-Brion. Obvious? Bottles don't always meet perfection, though they are never far off. This bottle, bought on release, was as good as it gets. It is one of those wines you have to try and taste just once in your life.

14)     1893 Château Montrose. Not only was this 19th century bottle beautiful upon pouring when I visited the château, it was even better after an hour in the glass. Pre-phylloxera nirvana.

15)     1986 Château Léoville Las-Cases. Simply one of the best wines of that decade. Michel Delon always rated it above the 1982 and I am inclined to agree. Easily as good as the First Growths, if not better than a couple of them.

16)     1955 Château L’Evangile. A year before frosts wiped out Pomerol, they produced a raft of sublime wines that continue to drink beautifully. This was stunning.

17)     1982 Le Pin. This is only the second time I have tasted this outrageous Pomerol. It is hedonistic, opulent, ravishing and to be honest, more "fun" than 1982 Lafleur and 1982 Petrus (pictured above in a remarkable tasting of the three properties over multiple vintages, to be published in the future).  Think of a Pomerol decorated with lots of Christmas lights and consider that it was initially sold for about twenty dollars.

19)     NV Mullineux Olerasay - Mullineux. Served blind at lunch, I was totally blown away by this South African solera from Chris and Andrea Mullineux, a blend of oxidized straw wines from 2008 to 2014 (just two barrels). Does such a wine belong in illustrious company? Yes.

20)     1961 Château Palmer. An ex-château bottle purchased from this year's Sotheby's sale, re-corked in 1998. I've had this half a dozen times now and this is the equal best example I have encountered since my first ex-château bottle. There is reason it is beatified as one of the greatest post-war wines. The 1959 Palmer tasted the same week was not too shabby, either.

21)     1928 Vieux-Château-Certan. A legendary Pomerol served blind (again). Made just four years after the Thienpont family purchased the property, it is a time-defying Pomerol full of wonderment. Thank you Mr. D (again).

22)     1996 Chevalier-Montrachet - Domaine d'Auvenay - What are the chances of a munificent gentleman from Leigh-on-Sea no less, proffering one of the rarest Burgundy whites to a lunch on exactly the same day that a once-in-a-lifetime d'Auvenay dinner is being held on the same night? This might be the best of several vintages tasted that day.

23)     1900 Château Batailley - legendary vintages earned their reputation via wines like this. Direct from the château reserves, to be honest, it tasted a bit "meh" for 30 minutes. Then, totally awesome. One of the great advantages of allowing wines the time to acclimatize after decades of incarceration in glass, is to witness wines like these blossom.

24)     1971 Dom Pérignon (P3 release) - I have drunk this a couple of times but this was far and away the best bottle. I've moaned, perhaps belittled champagne in recent months. This made me regret that...almost.

25)     1961 Château Siran - I mean, it doesn't have to be Palmer to have a great Margaux from this vintage. Bordeaux is full of treasures from châteaux that collectors and speculators are less interested in.