Back in Black: The Return and Rise of the Nero di Parma Pig

Almost extinct by the 1950s, the nero di Parma, as it is known in Emilia-Romagna, is now a pig on the wing. A breed rescued and rediscovered in 1990 thanks to a project carried out by Italy’s Ministry of Agriculture, this particular Sus scrofa domesticus now represents the pinnacle of porcine charcuterie.
The black pig of Parma was once widespread in Spain, Italy and Southern France, but as select English breeds were imported across Western Europe, the nero di Parma’s numbers dwindled to only a handful around Parma in the 1980s. Breeders managed to bring that figure up to approximately 300 pigs by 2008.
Its aptitude for wild breeding in the Apennines southwest of Parma, and its preference for free-range grazing unhampered by the stresses of fixed housing, make it almost unique among swine. The animal's carefree nature is evident and appreciated in its widely sought-after meat, as are the delicate aromas of the pigs’ diet of wild fruit and berries.
Nero di Parma is purveyed in all forms within the Parmiggiano tradition: prosciutto crudo, culatello, pancetta, salami, etc.—each under the protective banners of D.O.P., I.G.P. and P.A.T. —but this very important P.I.G. can be distinguished on the charcutier’s shelf by its proprietary peculiarity: a consistent distribution of intramuscular fat, which also allows the meat, deep red in color initially, to undergo rapid cooking while maintaining the right balance of flavor and tenderness. Cuts from the nero di Parma are now beckoning famous chefs from across the peninsula in search of these forgotten flavors.

Traveling 50 kilometers southwest from Parma to the Apennine National Park, you run into a town called Corniglio (not to be confused with Corniglia, a town in the Cinque Terre National Park another 100 kilometers in the same direction). Here you’ll find the company Ca' Mezzadri, founded in 2003 by Silvano Gerbella, where some 350 black pigs peacefully roam about 200 acres of woodland forest. They munch only on the fruits of their fecund surroundings. Connoisseurs will tell you that these aromas and flavors are to a pig’s meat what the minerals and soils are to a wine in any given terroir. Pears, apples, cherries, juniper berries and acorns are the principal ingredients on the swine’s seasonal menu.
They take about three years to reach a weight suitable for slaughter, piling on approximately 150 pounds per year, and then there’s another four years of seasoning and aging of the product. Silvano uses only natural preservatives such as Cervia salt and black peppercorns. 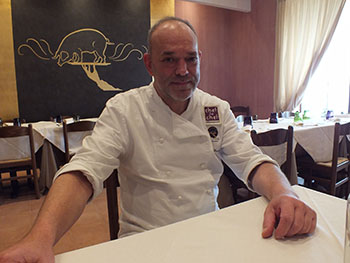 A short drive from Silvano’s farm is Ristorante Claudia, also in Corniglio, where chef Alberto Lambertini (pictured left) expounds upon his philosophy of “local, typical cuisine at Kilometer Zero.” Here, Silvano's careful husbandry and his salumiere’s precise handling of the meat align with Alberto’s creative flair to give life to sublime and thoughtful creations:
Battuta di crudo di spalla di Suino Nero di Parma: Accompanied by dandelion buds in olive oil, chile pepper and thyme, there is a sweet and savory taste that envelops the palate. The meat is free of any salt or seasonings for an unadulterated taste of black pig.

Fiocco di Suino Nero di Parma (pictured above): Almost like a culatello, this cut translated to “flake” in English has intense and penetrating aromas recalling the oak beams of the aging cellar. With hints of earthy notes, it releases an extremely sweet finish.

Pancetta di Suino Nero di Parma: On the palate we get references to pepper that surround its round flavor.

Spallaccio di Suino Nero di Parma: This pork shoulder opens to a marked sweetness, accompanied by a balancing savory scent, while the fat melts in the mouth delicately.

Anolini di Suino Nero di Parma: Puff pastry made with semi-whole meal flour, from ancient, stoneground grains and local eggs. The filling consists of black pig stew from a roux of celery, carrot and onion. The meat undergoes several stages of cooking for a total of eight hours. The selected cuts of the shoulder are mixed with the vegetable brunoise and are completed by the addition of Parmigiano-Reggiano (aged 28 months, from a small local farm). These precious pastries are served with a velvety ricotta cheese from Cornigliese sheep and golden drops of butter flavored with thyme.

As it turns out, snails aren’t just for Chablis anymore.

Today, the Boia Faüss microbrewery serves out about 200 hectoliters of beer per year, drawing on self-produced raw materials, giving them typically Teutonic imprints and Anglo-Saxon aspects.