Martín Berasategui is the best restaurant in the world... Now before you start scribbling a letter remonstrating how some dolt could make such proclamation when he has clearly not dined at every single top restaurant in the world, let me explain. When I departed Martín Berasagetui on that balmy summer’s evening last August, you know, I was dancing on air. There was that giddy feeling, the euphoria of having dined at what felt like the best restaurant in the world. There is no scientific fact or iota of objectivity. It was an emotional reaction to the culinary feast that had bowled me over. A restaurant of this ranking, one of the Holy Trinity of three-starred restaurants in the gastronomic capital of San Sebastián, has a duty to ensure that every patron enjoys that feeling of standing atop a gastronomic summit. The elation has not ebbed away many weeks later. I guess I don't want to come down.

As I mentioned in my round-up of 2016, if I were to choose the finest food on my plate that year, then no question it would be Martín Berasagentui. If Hedonist's Gazette awarded points for its restaurant reviews, and incidentally I am not averse to that idea, then this would be a 100-point "no-brainer." It was faultless. There were dishes here whose presentation were works-of-art and whose aromas bewitched and flavors satiated and challenged. Together these dishes assuaged my hunger, which sounds banal but frankly I have no interest in restaurants like Noma and its ilk, serving live ants and duping epicures into thinking it represents a culinary zenith. No – it’s just live ants wondering WTF they are doing crawling around a plate. While the dishes at Martín Berasagetui did push the envelope, you never felt as if you were being tested or challenged. It was the perfect equilibrium between adventure and familiar deliciousness.

The restaurant is located in the suburbs of San Sebastián. Let’s be clear: if you are seeking a panoramic view then go and lust over the hilltop view at Arzak, not here. Strangely, it is located on the fringe of the city, lost among humdrum tower blocks, a locale more befitting a fast food joint rather than a destination restaurant that foodies cross continents to visit. Then, out of the blue we came across a manicured grass verge and shrubbery, a rusted iron sign spelling out the restaurant. The magic trick is that as soon as you ascend the steps and enter its glass doors, like the cupboard into Narnia, the outside world falls away and you experience that fuzzy feeling of entering somewhere refined, somewhere special. This ambiance can be attributed to the interior design: wide-spaced tables you could drive a small car between, cozy and self-contained, nothing flash or ostentatious but something warm. You could be dining in Martín Berasagetui’s home and indeed the man himself was there in his whites greeting diners with the welcoming Spanish charm so often missing in France, where maître d's in starched shirts and starched personalities, look you up and down to gauge your worthiness. His staff is numerous but never overbearing, helpful when they know they need to be. When my wife asked whether they could translate some of the more esoteric dishes into Japanese, a perfect translation immediately appeared. They’ll probably offer the menu in Latin if you claim to be from the 15th century.

We opted for “The Great Tasting Menu” and no, it is not cheap, but you would not book a restaurant like this assuming that it would be. You are shelling out 220 Euros per person; undeniably expensive although cheaper than say The Fat Duck, and on par with many of its peers at this rarefied level. In any case, all pecuniary thoughts vanish as soon as the first courses arrive. If I can backtrack a little, word on the street prior to my arrival was that Martín Berasagetui had long been a fabulous restaurant deserving the three Michelin stars that it has held for 15 years. Flying at such high altitude over such a long period of time is an achievement in itself and as a reminder, each course on the tasting menu is accompanied by the year denoting its introduction. Yet the passage of time risks complacency. I’ve dined at feted restaurants contentedly coasting on their reputation. That was not the case here. On the contrary, I had on good authority heard that over the last 12 months, Martín Berasagetui had achieved an even higher level that took their cuisine beyond either Arzak and Akelarre.

At this moment, Martín Berasagetui was the place to come. 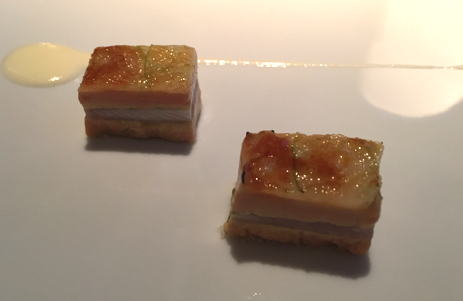 How do I translate the astonishing quality of every one of these 13 dishes? In some ways, photographs are better and I have tried to include as many as possible (although I had to use my iPhone, so apologies for the quality). As soon as a thick slab of black slate adorned with what looked like squeezed toothpaste tubes of brightly-colored Boletus, spinach, beet-root and plain salted butter, you knew that this was going to be a epicurean night to remember. Perhaps you could argue that the very best dish was act one. The mille-feuille of smoked eel, foie gras, spring onions and caramelized green apple was off the charts. It was not just the seductive flavors of velvety foie gras but the melt-in-your-mouth moistness, each layer perfectly marrying with the other. I became tearful because each chew was one step closer to swallowing and maybe I would never taste anything as mouth-wateringly delicious again. Such elation-tinged regret. I turned to my wife and begged her to memorize the ingredients and recreate it at home (though whether Sainsbury's stock all the ingredients, I'm not sure). 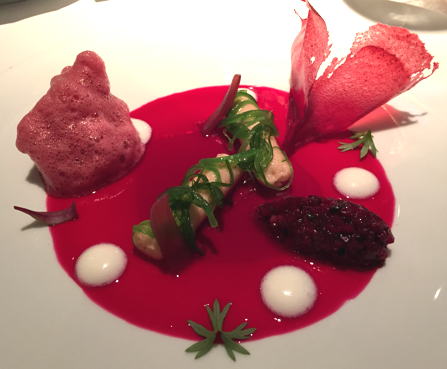 The red shrimp royale arrived in splendid foam, the Venta del Barón olive oil from Preigo de Córdoba having no need to explain why it was voted Spain’s best by the country’s Ministry of Agriculture. The caviar and turnip with cubes of pork shank and lemon came in an arresting black molded bowl so that it almost looked like a tiny volcano, albeit one that erupted with caviar rather than lava (if only that were true - countless lives saved). The next course of lightly marinated warm oyster with iced cucumber slush and K5, and spicy apple was designed to give the senses a kick up the backside after being seduced by opening salvo of dishes. The cucumber slush was like being gently electrocuted with a cow prodder. The warm oyster was heavenly: perfect consistency, its marine-flavors perfectly married to the sharpness of the cucumber. It dovetailed into the gaudy plate of beetroot juice and diced raw horseradish in salad, taramasalata steeped in citrus juice. I am not particularly keen on beetroot but I still found myself mopping up every drop of the lurid, almost luminescent juice.

The courses kept on coming, never once letting us down with anything below perfection. One that I remember distinctly was the red mullet with edible scale crystals, fennel with saffron and a liquid baby squid bonbon (pictured above.) As the plate was put down in front of us, the waiter instructed us not to cut open the bonbon but to pop it into our mouths whole.

I did not hear this.

Using my knife to prize open the parcel with surgical precision, before you could yell at the top of your voice “fetch the mop!” black ink sprayed over my shirt and onto the marble floor. You could almost hear an alarm going off in the back room. Within nanoseconds a crack team was busy wiping up the damage and mopping me down, stoic and smiling or perhaps gritting their teeth. By the time every drop of squid ink had been cleared up, my hearing had been miraculously restored so that my wife muttering “You idiot” under her breath was perfectly audible. 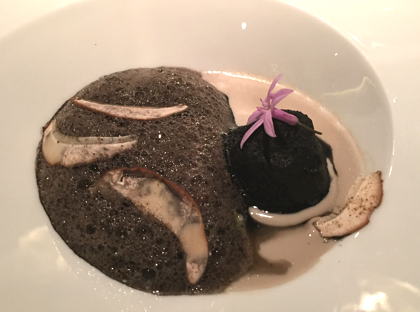 Course 8 was entitled: “The truffle” with fermented wild mushrooms and collard greens with Alma de Jerez (again, voted one of the world’s best olive oils). It was outrageous: earthy, wild, feral and proving once again that (and excuse me while I blaspheme here) the common black truffle is far more delicious than its white cousin. Half the global truffle production must have been cornered to create this dish and whatever pig snouted out this truffle deserves a medal for their hard work. Then “Gorrotxategi” egg resting on liquid herb salad and dewlap carpaccio was brilliant, almost like an existential take on a Sunday fry up. We often discuss balance in wines. Here was balance on a plate, each flavor so nuanced and complementing each other without any loss in clarity. Sensational. 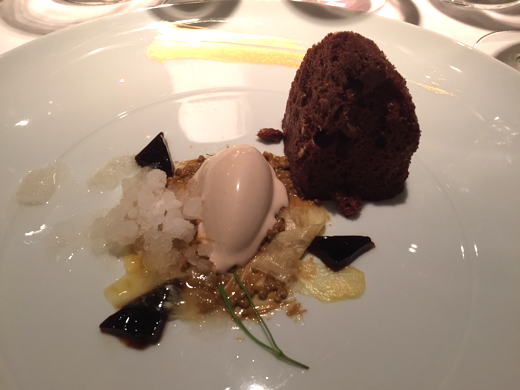 Things were just getting “silly” now. In some ways, the young charcoal roasted pigeon with potato and truffle bites and “forgotten vegetables” was the most conservative dish of the entire evening. I did make a mental note to ask what exactly the “forgotten vegetables” are, but I...err...forgot. The roasted pigeon had wondrous consistency and whereby at this stage, too often I find restaurants offer excessive quantities of meat that upset the overall balance of a multi-course dinner, here it was perfectly sized and did not leave you feeling bloated by the puddings.

The lemon with basil juice, haricot vert and almond was amazing, but the final course of chocolate rock and salted quinoa, rum slush and hazelnut ice-cream was the perfect way to end: outrageous, delicious, fun, exquisite and could I have more please?

With respect to the vino, people often assume that as a wine writer I am constantly devouring restaurant lists and searching for perfect matches to prove my wine knowledge. On the contrary, sometimes you want the sommelier to take control so that I can enjoy some off-duty vinous time. The young lady at Martín Berasagetui did a magnificent job, the selection of 7 or 8 wines wisely veering more towards the white than the red. Highlights included the 2014 Vidonia Blanco Dulce from Suerte del Marqués that had just the right amount of jarring oxidation from their Palomino vines; a sumptuous 2010 Matallana, the Ribero del Duero from my great friend Telmo Rodriguez, who can do no wrong in my book; and the 2014 Kalamity from Oxer Wines, which as Luis Gutiérrez rightly observed, has aspirations towards Sine Qua Non thanks to its eye-catching label, the wine delivering big time on the ripe and opulent palate that knew exactly where to draw the line.

Afterwards we were invited into the kitchen to meet Martín and though my Spanish is terrible, the smile on my face was sufficient to convey my pleasure. As I find in all the best restaurants, the kitchen was both perfectly clean and an oasis of calm (I’ve never bought the idea of a stroppy bad-tempered chef as being indicative of talent – just a big ego and a misanthropic bent). Rereading this review does not really do justice to the dinner at Martín Berasagetui. I cannot claim to have eaten at many 3-Michelin starred restaurants, but certainly in terms of the quality on my plate this could be the best. It was not just the food. It was the relaxed ambiance that Spain does perfectly. It was the attention to detail, the precision, the nuance. It was their ability to present innovative taste sensations without feeling tested. It was the friendliness and knowledge of the mainly young staff. It was the simplicity of it all. You come. You eat some of the most incredible dishes of your life. You pay a lot of money. You leave cherishing a memorable night and in my case, a white shirt in urgent need of dry cleaning.

You need to go to Martín Berasagetui.

3: -  Caviar and turnip, with pork shank broth cubes and lemon

7: -  Green and black olives with beef, caper and mustard

8: -  “The truffle” with fermented wild mushrooms and collard greens with “Alma de Jerez”