A Wine Lover’s Guide to Madrid

Yes, there are lots of restaurant guides talking about the best addresses in most cities around the world. But when it comes to those of us that are crazy about wine, the best places are those that combine the best food with the best wines or where to buy the finest bottles. I’ve been asked that same question loads of times, and that’s what I’m going to tell you about here, the best addresses, wine bars, shops and restaurants from my hometown—Madrid. 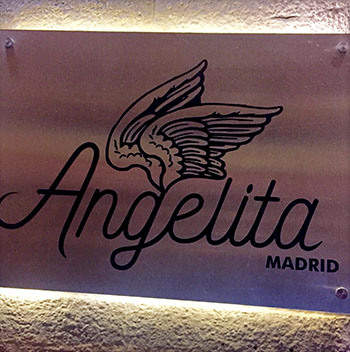 Angelita Madrid is the new name and location run by the Villalón brothers, who made their fame at El Padre. It’s just behind Gran Vía, in Calle Reina 4, where you go for the unusual, hand-picked wine list full of different and interesting stuff to drink. David Villalón is always in search of old vintages, unheard of and hard to find names, while his brother, Mario, takes care of the cocktails that you can sip before you eat or afterwards downstairs while you’re chilling out, and he always has a whisky from your year or an exotic vermouth, as well as an unusual combination of ingredients.

The irreverent Asturianos remains one of the best terroir restaurants for authentic food from Asturias. The food is cooked by Doña Julia Bombín and her sons, Alberto and Belarmino Fernández Bombín, assemble an impressive wine list. (The also distribute, import and even produce them.) They have a great selection from Portugal, and Belarmino started a winery called Canopy, in Méntrida, where he makes the likes of Tres Patas, Malpaso, Loco or the outstanding La Viña Escondida, one of the best examples of the new Garnachas from Gredos. The fare is traditional and hearty, the kind of comfort food that people used to have at home that is sadly disappearing from family tables in these fast-moving times. Doña Julia is the guardian of the best Asturian traditions.
One of the newest and trendiest places has to be A’barra, where people want to be seen. But that’s only secondary in this joint venture between Joselito, producer of the best ham in the world, La Catedral de Navarra, suppliers of the finest vegetables from Navarra, and maître Jorge Dávila. They hired the ex-Zalacaín chef and renovated the huge impressive restaurant whose cellar, under sommelier Valerio Carrera, has some of the best wines in the world. It all started with Álbora, which remains a highly recommended restaurant and one of the liveliest bars in town, and evolved into A’barra. And I have a feeling that the best is yet to come…
How unlikely is it for me to recommend a flamenco place as one of the places to keep on the radar screen for wine lovers? El Corral de la Morería not only offers the best live Flamenco in the world, but they also have one of the best young chefs, David García, who helped Álbora obtain a Michelin star. But, what about wine? Well, flamenco and Sherry often go together, the terroir expression of Andalucía, and brothers Armando and especially Juan Manuel del Rey have fallen in love with Sherry. Their mother, Blanca del Rey, is one of the most respected flamenco figures in Spain, and the family runs this tablao-come-fine dining restaurant in the very center of Madrid in the Calle Morería 17. They’re only open at night, so the plan is to have dinner with the best Sherries and then see the live show. You won’t regret it. 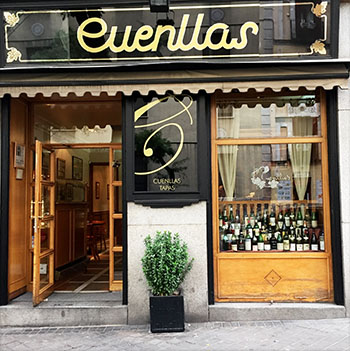 Cuenllas is far from a newcomer. It all started as a fine food shop over 75 years ago. They still have the best cheeses, hams and sausages, tinned fish, chocolate and all the goodies you can think of, including wines. But the wine section has turned into an enviable collection of impossible-to-find labels with the arrival of Fernando Cuenllas, the third generation in the business. All the bottles you read about but you never see, are there—Raveneau, Leroy, Rousseau, Vatan or Didier Dagueneau, but also Vega Sicilia, older vintages of López de Heredia or the latest wine by Envinate, Comando G or Equipo Navazos. They also have a bar and small restaurant next door where the philosophy is the same as in the shop: only the very best will do. This is one of those places where you’d want to move in! The shop is in Calle Ferraz 3, and the bar at number 5.

The name Enoteca Barolo leaves no doubt about what the focus of this shop is, as they bring small parcels of Italian wines that you won’t find anywhere else in the country. But their selection is a lot wider than that, with hand-picked labels by owners Miguel Prohens and Ángel Fontes, who strive to find cutting edge producers in most regions both in Spain and the rest of the world, with a strong focus on France. They are at Principe de Vergara 211, a little further away from the center, close to the Real Madrid football stadium. They are strong on tastings, and have one most evenings. 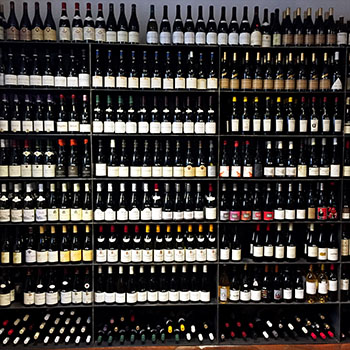 Tintorería is the Spanish word for dry cleaners, but tinto is red wine, so La Tintorería could be a place where they sell tintos! They sell, tintos, blancos, espumosos, fortificados and even jaunes at this small wine shop at Gurtubay 4, very close to the Retiro Park and Kabuki Wellington, the best Japanese restaurant in town with a remarkable wine list strong in Riesling and Champagne. La Tintorería is somehow specialized in Galicia, with a wide selection of labels from Raúl Pérez and his multiple projects and joint ventures, and they also import some stuff, names like Rayas, Clape, Clos Rougeard or Puffeney. They have something for all tastes and price ranges, and the best policy is to rely on the shop manager, Juan, who will recommend wines to fit with what you’re after.

The first Lavinia wine shop to open in Europe was in Madrid, which at the time was the largest wine store on the continent. They now have more shops, most notably in Paris and Switzerland, but the original one on José Ortega y Gasset 16 is still a reference point. The selection is wide, and they kind of follow the French caviste-style, stocking mostly wines from their producers. It was the first wide selection of foreign wines when they opened in 2000 and continues to be one of the most extensive. They have some of those machines where you get wines by the glass, and they also have a restaurant upstairs where you can drink any bottle from the shop. 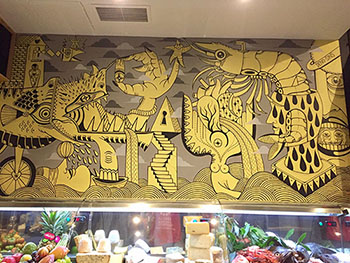 If you only had time for one meal, I’d say go to Laredo and put yourself in the hands of Miguel Laredo who runs the restaurant and cellar, while his brothers, Javi and David, are responsible for the bar and kitchen respectively. Labels tend to rotate fast, so that’s why you want to rely on Miguel. The menu has a strong focus on large-sized wild fish, but they are equally good in dry-aged red meat and a cheese selection that has few rivals in town. You should not leave without trying the rabbit chops. They are at their third location at Doctor Castelo 30, where the surrounding streets offer some of the best tapas in town; the bar is also very lively, where you can have most of the food from the restaurant or any bottle from the cellar if you cannot secure a reservation—they tend to be fully booked in advance.

La Fisna is one of the new wine shops and bar combined, an attractive formula, as you can drink any bottle from the shop or take them home. They have an offer of wines by-the-glass and special bottles to go with their tapas and raciones in an informal atmosphere in an old part of town. They are at Calle del Amparo, 91 in the Lavapiés district, not far from the Reina Sofía Museum, where you should not miss Picasso’s painting of Guernica. They also act as wine distributors specialized in Burgundy, and are the sole importers of Mugneret-Gibourg, Michel Niellon or Michel Gaunoux, and even if those bottles tend to fly and some are highly allocated, they always save some for the shop and bar. 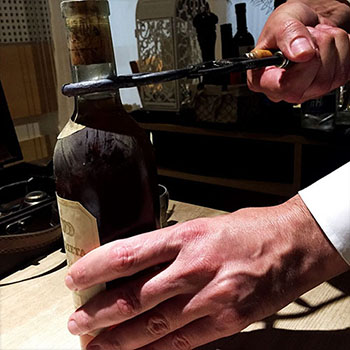 Yes, there are a few places run by brothers, where routinely one of them is crazy about wine. That’s also the case at Restaurante Vinoteca García de la Navarra on Montalbán 3, behind the Palacio de Cibeles, and its sister La Taberna de Pedro next door. Pedro is the chef and Luis is in charge of both the dining room and the cellar that both restaurants share. He has built a collection of verticals, not only of the most iconic wines from Rioja, Rías Baixas or Ribera del Duero, but also Bordeaux and other regions in France, Italy, Portugal and even some labels from South America. Both restaurants are specialized in seasonal ingredients, mostly vegetables sourced directly from the regions as well as stews and casseroles. Don’t miss their callos a la madrileña, the traditional tripe stew from Madrid. They were recently invited to cook this dish at Ducru Beaucauillou in Bordeaux—and everyone loved it!

These are not necessarily my highest-scoring wines, but some are! I’ve also included an element of discovery, excitement and novelty in my selection here, with wines from Chile, Argentina, Spain and the Jura.

Here are our reviewers' peaks of the year.