Why Is Everyone Obsessed With Rhubarb?

With the advent of spring, hordes of chefs and home cooks alike flock to grocery stores and farmers' markets to stockpile the season's bounty, such as white asparagus, ramps and rhubarb.
Rhubarb is (most often) a rose-hued vegetable that resembles celery. After being separated from its poisonous leaves, it's most commonly loaded with sugar and turned into some sweet confection. But the question remains: why?
Rhubarb has a very tart flavor profile that seldom few dare to consume on its own. It only becomes palatable after generously sweetened and/or combined with other ingredients, such as the crowd-pleasing strawberry-rhubarb pie. However, no other ingredient has such high popularity without the ability to stand on its own. That's akin to the notion that Beyoncé could only be successful as a member of Destiny's Child.
So, is rhubarb actually worthy of the adoration or is it overhyped, a result of like-chasing foodies and good PR? In my quest for the truth, I consulted with a slew of chefs to get their take on the produce in question. 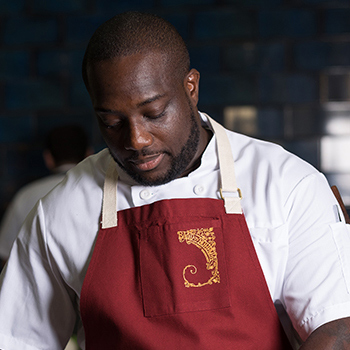 Ian Davis of Band of Bohemia (pictured right) likens rhubarb to "granny Smith apples on steroids—supper tart and sour with a hint of sweetness." His team cooks it down with elderflower liqueur and sugar to make a jam that is used year round. Davis thinks it's great when paired with anything sweet or fatty, such as French toast or foie gras.

Joe Flamm of Spiaggia agrees that rhubarb is too acidic on its own, and needs sweetness or fat to balance it. He admits that there are limited savory applications, but it is currently featured on Spiaggia's dessert menu poached in bubblegum—yes, you read that correctly—with Roman honey cake, buttermilk and spritz syrup. One thing he does mention is that rhubarb is one crop that grows well in the Midwest. "That's a big thing for us when we consider local sourcing. As Midwestern chefs, it's always good to get something that actually grows here," he states. 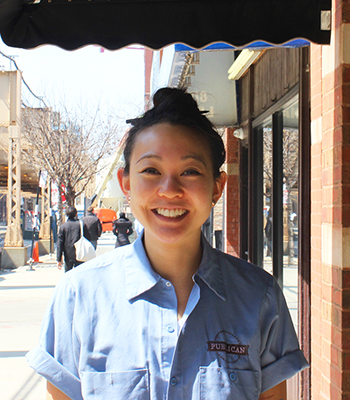 For Erika Chan—the new executive pastry chef of The Publican and its family of restaurants (left)—she is a rhubarb-phile, praising its vegetal, bright, tart and clean flavors. "My number one reason for loving rhubarb is it's adaptability and versatility, which is why I have it all over the menu currently (our shared brown butter rhubarb crostata, rhubarb baba au rum, a rhubarb jam sable in our cookie jar and on cinnamon toast at brunch)," Chan shares. "I love rhubarb in pie and jam. It also makes a great accent to dishes when it is lightly poached or hot pickled. Rhubarb can provide great texture and acidity when barely cooked and lightly sweetened. It takes on deep, rich flavors such as caramel and brown butter wonderfully, but also can be bright and acidic when paired with citrus and lighter flavors."

For Blackbird chef de cuisine Ryan Pfeiffer, he's a fan of the optical illusion, of sorts, that rhubarb provides. "The most unique thing is that it can taste so 'green' but look so pink," he shares. Standing apart from the pack, Pfeiffer doesn't discriminate in his consumption of the vegetable. "I'll eat rhubarb in any preparation: fermented, poached, pickled, made into a jam and even just raw. That might be my favorite way if I have it to be honest."

My own skepticism aside, each of the chefs shared the same reason as to why rhubarb is so beloved (and one that I can get behind): "It is the first sign of spring. After a winter of pears and apples, it is always exciting to get rhubarb in for its color, freshness and bright flavor. Along with seasonal spring ingredients like favas, ramps and peas, rhubarb signals the end of winter," says Chan.
If rhubarb means the end of cold temperatures and a winter that just won't end, then consider me a believer.
Rhubarb photo by Ellis Calvin via Flickr.
Photo of Ian Davis by Kristen Mendiola.
Photo of Joe Flamm by Matt Haas.
Photo of Erika Chan by Rachel Dickens.
Photo of Ryan Pfeiffer by Alexa Bendek.