How to Properly Taste Scotch Whisky

Glenmorangie’s Brendan McCarron shares his tasting techniques over a glass of the limited-edition Glenmorangie Astar 2017.
A chat with Brendan McCarron over a glass of Glenmorangie or Ardbeg—he is the Head of Maturing Whisky Stocks for the company—sheds the stuffy, highfalutin image as his boyish enthusiasm for the Scottish spirit shines through. With some helpful tips for appreciating whisky, McCarron shows us how a dram after dinner might be sweeter than a dessert of ice cream and crème brûlée.
Whisky, Bourbon, Scotch—what’s the difference?
In essence, Whisky is an alcohol distilled from fermented grain mash; therefore, Bourbon, made from corn, and Scotch, made from malted barley, are both whiskies. However, Scotch is made in Scotland, and bourbon is made in America.
But as McCarron explains, Scotch and Bourbon share an interesting relationship: “Historically, the Bourbon industry uses each cask once, so there was a market to buy used casks from America. Using new casks for Bourbon suits the nature of Bourbon and also takes the edge off and seasons the cask, making it perfect for aging Whisky afterwards.”
When a Bourbon cask is brought to Scotland and filled with Whisky for the first time, it is called a first fill cask, and these first fill casks are considered most interesting because it extracts the strongest flavors from the wood.

Let's talk about the relationship between wood and Whisky.
In 2008, Glenmorangie released the Astar, a limited-edition single malt Whisky entirely matured in oak casks from the Ozark mountains of Missouri. McCarron was a fan of the original and longed to revisit the single malt’s unique character. But casks designed to such precise specifications require many years and much dedication to create. 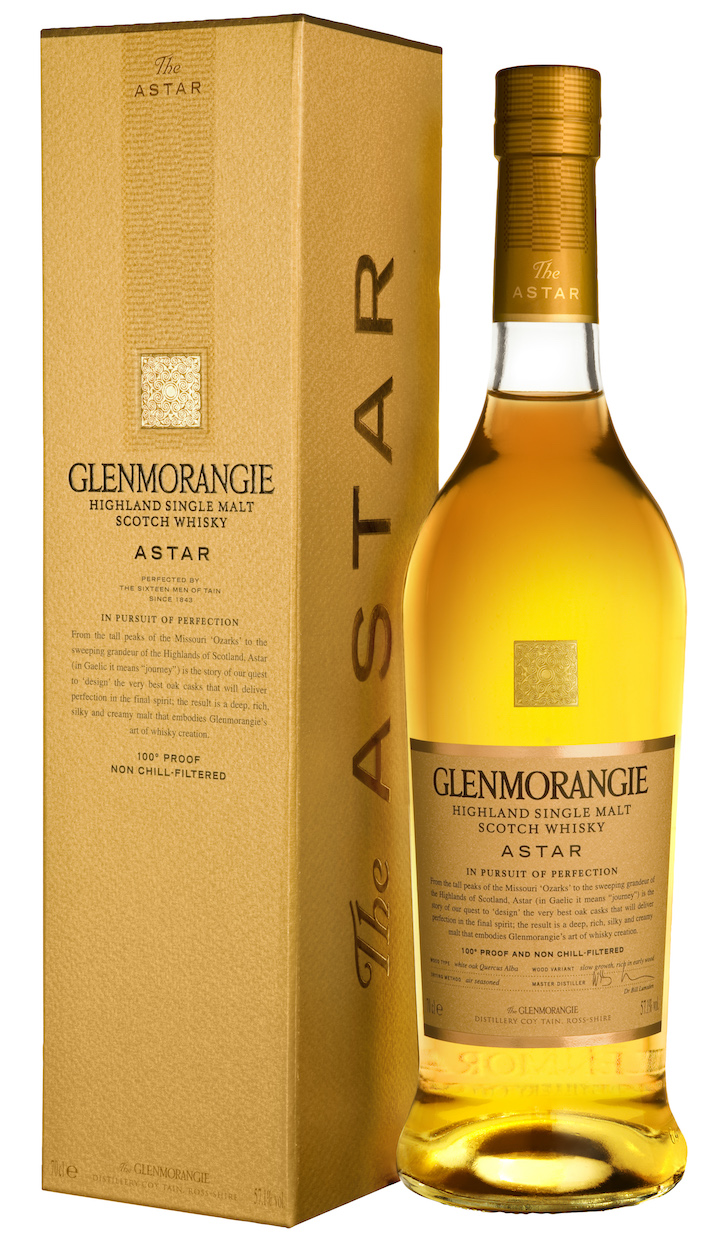 “The whole thing is a very controlled process,” explains McCarron. “We own these slow-growing trees in America that grow very straight and tall and after we fell them, they are seasoned for two years so all the flavors are kept in the wood. Once they are made into casks, we heavily toast them and lightly char them, completely in control of what these casks are going to do, and fill them with bourbon for four years exactly—almost to the second—and this makes the casks as perfect as they can be, only then does the Glenmorangie spirit go in.”
It has taken almost a decade for Glenmorangie to orchestrate the Whisky’s return and McCarron takes us through a tasting of the newly-released Astar 2017. “The Astar uses designer first fill casks. Even the Glenmorangie Original only uses the casks twice, other whiskies might use them up to six times. So, the Astar is like the Original on steroids, a pumped-up version of the Original.”

How to Properly Taste Scotch Whisky

1. Look at the color.
McCarron pours a finger of the Astar 2017 into a tulip-shaped tasting glass and lifts it up to the light. “You can first look at the color. If its lighter, you’re probably expecting a lighter, sweeter Whisky. If its darker, it’s probably an older whisky or it’s got a lot of sherry in it.”
2. Nose the Whisky.
Next, he urges us to put our noses as far into the glass as we can: “Get it right in until your nose gets wet and breathe in gently.” We take a whiff and our eyes start to water from the alcohol fumes. At 52.5% proof, Astar is a high-strength whisky in comparison to most other whiskies which stand between 40-46%.

“You might be breathing in too strong because your nose is designed to take in a lot of air. So, what I do is open my mouth and breathe in through my mouth instead and this will bring in just the tiniest amount of air through your nose,” McCarron advises. “On the nose, this smells like a very sugary dessert, like crème brûlée, with some lemon and citrus notes.”
3. Take a sip, and repeat.
With wine, this step would involve some swirling and sucking in air through pursed lips, but McCarron says it isn’t necessary with Whisky because of its high strength. Instead, he recommends taking a sip and holding it in your mouth for a second, just enough time for it to cover the taste buds on your tongue and swallow. “At times, it can get overly complicated. I once heard someone say that if a whisky is 12 years old you hold it in your mouth for 12 seconds, but that’s just completely rubbish,” he laughs. “We try a few sips—neat—and start to taste notes reminiscent of vanilla and coconut,” which McCarron explains, comes straight off the American oak casks.
4. Now, add a splash of water.
Here is the crucial step in tasting Whisky: Paradoxically, diluting the whisky doesn’t water down its flavor, instead, it opens up the spirit and releases even more nuances.
“There are certain flavors in here that are soluble in alcohol but not in water so as the alcohol concentration drops, you can see them coming out—see the oils and the fats swirling around—like a flower blooming. Now you’ll get more of the stone fruit, like peaches dipped in ice cream or vanilla fudge,” says McCarron.
We take a sip and to our surprise, even the texture of the drink seems to have changed—now with a smoother and creamier mouthfeel.
Could the addition of ice have the same effect, we ask? "With ice, it cools down the Whisky too quickly and you won’t get the flavors coming out. Ice is good for just enjoying or drinking a Whisky, but even just a few drops of water can change your tasting experience. And practice, practice, practice.”