Have you ever been shot at point blank range by an opera singer?

It happened to me in Beijing. Sitting within a few feet of one of China's most celebrated tenors, he stands in front of the open kitchen with arms open wide, unleashes a snippet of "Ave Maria". The kitchen hands behind him stop their slicing and stirring; forks frozen in front of open mouths. Particles of heavenly music occupy every molecule in the restaurant, every cell in our bodies: an audience transfixed and spellbound.

I must confess that up until that point this philistine had dismissed opera. I blame my grammar school. Determined to instil high culture into their oafish pupils, Mr. Evans the music teacher carted a coachload to the Royal Opera House to sit through "The Magic Flute". No offence to Mozart but sitting up in the gods, bored and restless for what felt like eternity, I decided that life was to short for music written by dead people, for dead people - dead people that spoke German. To quote my favourite opera singer, Morrissey, "it said nothing to me about my life". Thereafter, my operatic fix amounted to nothing more than snatches of "Rigoletto" when flicking through the TV channels and pausing too long on BBC4, and of course, the bridge of "Bohemian Rhapsody".

That was the old "me". Feeling the full force of a tenor's voice in such close range, I must confess that although I am never going to forsake Pixies for Puccini, I understand the attraction. Even though I cannot connect with opera on an emotional level, I understand why others do.

Despite his inspiring rendition of "Ave Maria" and the kudos of having been Pavarotti's only Chinese student that does not mean he knows about wine. Upon sitting back down at the table he had insisted that Petrus 1985 is better than Le Pin 1985. That is like me standing on stage at Bayreuth to rapturous applause, only to belt out flat rendition of "Karma Chameleon". Sing to your heart's content but leave the Pomerol stuff to me, matey. Despite my adoration for Petrus, Jacques Thienpont crafted a few superior wine back in 1985. Fact!

I should explain how all this came about.

Before publishing "Pomerol" I had confided to a Hong Kong friend that I would love to conduct a tasting of Pomerol wines on the vinous new frontier: China. She happened to be well connected on the mainland and thanks to her sterling efforts, here I am at the Four Seasons hotel in the capital city with some extremely notable Chinese guests enjoying some exceptional wine and Ave Maria. 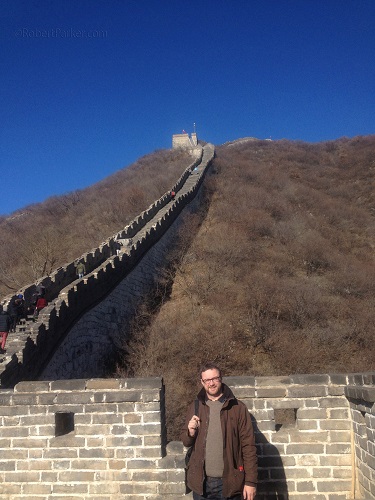 Beijing is a metropolis that is finding it difficult to shrug off its reputation as one of the world's most polluted cities as much as the pollution itself. I was fortunate that on this weekend the haze had alleviated, my guide reassuring me that this was as good as it gets. Still, the motorways haemorrhage with traffic. We had an opportunity to visit the Great Wall, one of those childhood Holy Grail landmarks. The sheer scale and magnitude of this ancient defence is awe-inspiring, the crenelated hemline stretching across the jagged mountains as far as the eye can see. It is difficult comprehending the fact that it trails for thousands of miles into the wilderness. We walked as far as we could go, although what initially appears to be a leisurely promenade actually turns out to be an exhausting physical workout as you mount dozens of steps and ladders. Therefore upon returning to Beijing we sought reconstitution and there were only three letters up to the cause.

I had noticed how the wise citizens of Beijing have taken Colonel Sanders to their hearts far more that crusty old clown, Ronald McDonald. Was this the result of some diktat from the Chairman? Upon further enquiry discovered that the Chinese regard KFC as "The French Laundry" of fast food. Was that true? Did every branch of KFC have a Thomas Keller behind the counter? There was only one way to find out, much to the surprise of my guide who had not foreseen queuing alongside baying children and tobacco-scented lorry drivers for a KFC bucket. You know what? Beijing KFC is one of the best I have ever tasted and if I could have awarded three Michelin stars there and then, I would have. Suffice to say, China leapt several places up in my estimation.

Come the evening, it was time to don my suit and welcome guests. A special menu had been designed to accompany the courses including grilled octopus, a sublime mushroom risotto, blue fin tuna with tomato coulis, marinated Iberico pork neck with Chinese 5-spice and a Wagyu rib eye fillet. 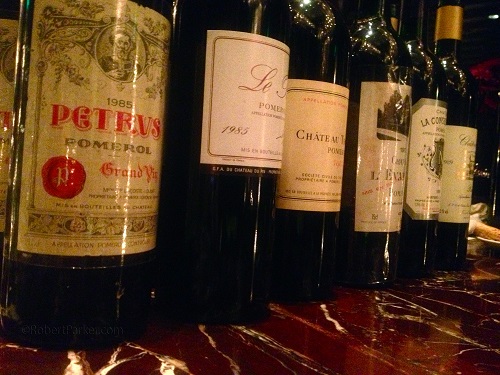 Six Pomerol wines were carefully chosen for the event, three pairs focused upon the best vintages of the 1980s. The first was a rare opportunity to contrast the Petrus 1985 against the Le Pin 1985. For me, there has never been a contest between the two wines. Given the quality of the growing season, I agree with Robert Parker the Petrus '85 to be a rare dropped catch by Christian Moueix. I have encountered it several times, both blind and non-blind, and its shortcomings are illuminated whenever it is juxtaposed with successful Pomerols such as Lafleur or in this case, Le Pin. It is simply missing the substance, the concentration and fleshiness of a great Pomerol wine, a half-baked Petrus stuttering on two cylinders. Shimmy over to Le Pin and you have everything you seek in a Pomerol: a flamboyant, sensual bouquet with sumptuous fruit, velvety smooth tannins and volume, that peacock's tail of flavours on the finish. I have been smitten by Jacques Thienpont's wine for several years and it remains one of his great successes, even if it is now as rare as hens' teeth.

The next face-off saw Château Trotanoy 1982 enter the ring with Château L'Evangile 1982. Here, Moueix was the winner. The redoubtable Trotanoy is a magnificent beast, a shire horse of a Pomerol that has taken years to really come around. It is now at its peak - the quintessential Pomerol in many respects. I've never been totally enamoured with the Château L'Evangile, even though stylistically there are quite similar. But side-by-side, it did not possess the same degree of intensity or concentration, or the same harmony - rustic and rather broody by comparison, with more dryness towards the finish. I just think Mme. Ducasse did not quite have her eye on the ball in this year and was probably too busy watching the World Cup.

Finally, the Château Clinet 1989 and the Château La Conseillante 1989. This pair was more evenly matched. This bottle example of the Clinet '89 was not the same calibre as the magnum encountered earlier in the year, but it was still a representative example of a great Pomerol, albeit one that is inconsistent from bottle to bottle. The La Conseillante 1989 never seems to have the problem. Whilst it does not reach the peak of the greatest Clinet '89 that I have tasted, this never fails to deliver those waves of succulent black fruit that are now determined to embrace secondary flavours such as roasted chestnut and cured meat. If you want a safe bet, go for La Conseillante, if you want to risk it but have the chance of a fabulous Pomerol that will leave you gob-smacked, go Clinet.

What an evening it had been. Afterwards I ended up in a karaoke bar warbling old Beatles songs surrounded by an obscene amount of empty Dom Pérignon bottles, interspersed with shots of the Chinese spirit known as "Moutai", a magical elixir that is 50% proof but comes hangover free. To my surprise, this was true. It has been a fantastic evening and a joy to share the pleasures of Pomerol with such an appreciative audience. When I returned home I decided that it was high time that I grew up and put Mozart's "The Magic Flute" onto my hi-fi, sat back and listened...

I was bored after two minutes.

(My thanks to Mayfair Fine Wines for organising the dinner and sourcing the bottles for the event.)