27 September 2016
Here I am in Bordeaux taking a close-up view of the vineyards either just before harvest or during the first days of picking. I very rarely visit a region during the vendange, not because of any lack of desire to witness the winery at its most active and interesting. No, it's because I feel like I am in the way, like a pesky fruit fly hovering over an open glass of wine. The task in hand is picking, sorting and vatting. Time is of the essence. The last thing anyone needs is me loitering around with my bloody camera and notebook. However, several châteaux invited me over, so why not?

Here are just a few observations. A detailed season report can wait until next spring.

The vintage 2016 will be seen as a game of two halves. Basically, it poured with rain until early summer and then suddenly the taps were turned off. And they were turned off tight. There was hardly a drop throughout July and August when usually there is around 50-60 millimeters. Some of the younger vines on shallow roots have suffered some hydric stress while the older ones, replenished by moisture deep underground, take it in stride. One property on the Right Bank said that they noticed some vines shutting down in the latter part of August. Come September,  there was some relief with a deluge around September 19, when 25-35 millimeters fell on Bordeaux. This sudden downpour was too late in the season to really affect the vines and inspecting bunches, I found little sign of inflated berries and/or split skins. 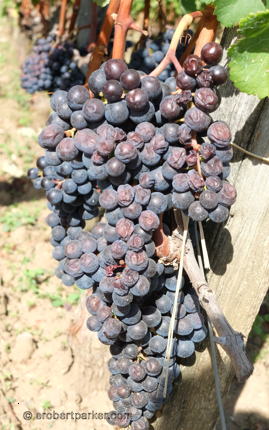 Otherwise, September has remained dry. The days were blissfully sunny between September 26-28 when I was around—not a cloud in the sky. That is not to say that everything is perfect—this piece is not intended to paint a picture-perfect postcard. First off, vineyard managers have had to keep a watchful eye on "ver de grappe," a tiny worm that can infect the bunches. Spot that and you need to get in the vineyard pronto and snip it off. It's not a huge deal, but it does mean that some properties had to send out harvesting teams earlier than expected. Secondly, that flaming ball otherwise known as the sun. I noticed in several places some raisining of the bunches, because of the incessant sunshine over the last three months. Come 2016's sunshine hour figures, I expect they will not reveal the whole story, skewed by the lack of the sunshine in the first half of the season and excess in the second.

Winemaker Nicolas Audebert escorted me into the vines at Château Canon and shriveled, raisined berries were easy to see (see left picture). Squeeze one and the thin skin meant that they could easily split and release juice. Taste one and it lacks energy, freshness. However, flip the bunch over to inspect the unexposed side and bingo! The berries appeared nigh perfect. Chuck one in your mouth (I ate a few) and the pulp is sweet and fresh, the skins a little thick, the pips brown and crunchy. Therefore, pickers will be instructed to just snip away the exposed side of shriveled grapes. Nicolas told me that you might still be able to use that fruit as long as they undergo a gentle extraction, but the important task is to parse them away from the healthy part of the bunches, instead of just pouring them all into the vat together. You've just got to be on your toes.

I spent one afternoon at Mouton-Rothschild with Philippe Dhalluin and his team who had just begun picking their younger Merlot vines. I noticed that the berries were small compared to other years, whereas on the Right Bank they were more normal in size. I finally got to see an optical sorting machine paying its way and actually working. Mouton has two installed at their reception, although only one was needed on the day that I visited, since they are just getting going. These optical machines seem to be accepted as part of the winery "furniture" now, albeit as a kind of safety measure after the more traditional method of using eyes and hands to pick out unwanted berries, leaves, detritis, etc.

They seem more common on the Left Bank than the Right. This is because their great advantage is speed and when you have 100-odd hectares to pick within a limited time frame, optical sorting machines can really justify their money's worth. On the Right Bank they are used, but not so much. Smaller vineyards mean that beady-eyed women (and it always seems to be the fairer sex) are enough to ensure that only the best fruit enters the vat. This is certainly the view of Ronan Laborde at Clinet, who had a couple of vibrating sorting tables doing their job as the Merlot was coming in from the plateau. Talking of which, one interesting remark I heard was that the dry conditions have enabled Pomerol's sandier terroirs to produce better fruit than normal, so it will be interesting to see how some of the properties away from the plateau perform next year.

At Cheval Blanc, when I visited on September 28, Pierre-Olivier Clouet told me that their Merlot had been picked. "Why wait?" he said. "The fruit was perfectly ripe." They'll be broaching the Cabernet Franc soon like others on the Right Bank, and the forecast is a continuation of dry sunny conditions, a brief shower at the weekend, which should not have any affect. When I was at Montrose on the Left Bank, they had started picking on the Monday, September 26, but when I arrived the following day, they had decided to pause for 48 hours to achieve more ripeness. Inspecting the pumped juice at Mouton, it was already pink in color. Philippe Dhalluin told me it usually takes two to three days to leech out that depth of color. If you don't believe me, then if you scroll up to the background image behind the title. That was taken at Mouton and I have not altered the contrast or brightness.

Anyway, that is all for now. As they saying goes, it's not over until the fat lady sings, and all the fruit is safely in the vat.