Snowdonia is an untamed version of the Lake District. Wild and forsaken; rugged and windswept; a dramatic landscape of maudlin greens and greys sculpted with a blunt chisel; mirthless and merciless. Whereas the Lake District could have been modeled by the Cumbrian tourist board in order to provide a canvas for poets and children's authors like Wordsworth and Potter (Beatrix not Harry), Snowdonia represents its sullen and broody tearaway cousin. Freshwater lakes gaze gimlet eyed towards forlorn craggy peaks; streams bubble and cascade from unseen uplands; scree tumbles down ominous vertiginous slopes and lend yawning valleys their unkempt appearance. Since time immemorial, this corner of North Wales has drawn sightseers from afar, yet you rarely witness the cavalcade of coaches packed with camera-toting tourists. Snowdonia attracts those seeking solitude, those desiring to lose themselves in an unforgiving landscape that seems to absorb natural light. It attracts experienced hikers unafraid to expose themselves to the elements; thrill-seekers risking life and limb scale walls of slimy black slate or thrown around foaming rapids.

It also attracts wine writers seeking recovery from penning their Burgundy report against an almost impossible deadline, in this case, a wine writer convinced that Wales produces the best lamb in the world. I would happily go on record with that statement. Pauillac "mouton" does come close, ditto the best I have eaten on the South Island in New Zealand. But nowhere does lamb reach the pinnacle as it does here in Wales. Mountainsides are specked with white dots of grazing sheep, oblivious to how God made them so damn delicious. It's probably best they don't know.

So at the end of December, I returned to Snowdonia for the first time since I was 5 or 6 years old. I have hazy  recollections of a family holiday near Llanberis, catching the rattling train up to the Snowdon peak where we enjoyed a 360° view of fog. I thought we could see Scotland for the summit? I could barely see my own hand. Oh well. Recently I had been itching to return and in that aimless interregnum between Christmas and New Year, we drove to the village of Betws-Y-Coed (and I should say here and now - please don't ask me how to pronounce any of these Welsh names). Betws-Y-Coed serves as a portal town into the national park; Nordic in feel, tucked in a coniferous valley teaming with hikers in mud-splattered boots and waterproofs planning their next expedition.

I booked a table at the Bistro Betws-Y-Coed along the village's main thoroughfare. There was nothing fancy on the menu, but: a) there was lamb, b) they listed local suppliers, always a good sign as any substandard fare implicates another party, and c) I just had a feeling. And that feeling proved right because this is what this country excels at (when it can be arsed) - simple cooking with world-class ingredients. The evening was full when we arrived, the decor cozy in a bistro-like way, casual but never sloppy; the staff was young, helpful and friendly. 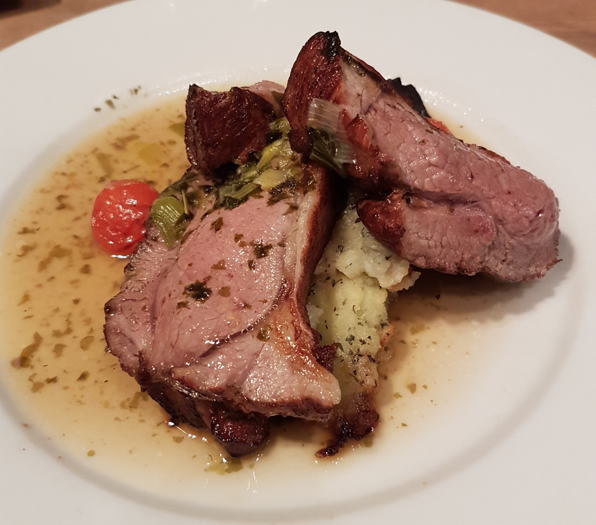 I ordered a sharing platter for two to begin. The chicken liver pate was absolutely delicious, quite firm in consistency and packed full of flavor. I would have liked some kind of chutney to accompany it but I happily slapped it on the bread. It came with green olives, stuffed mushrooms, spicy cod strips and prawns bathing in a Marie Rose sauce. Nothing extraordinary, maybe a bit 70s kitsch, but everything cooked perfectly. For main course, well it had to be Welsh lamb cutlets sourced from J. Williams & Co in Denbigh that had been marinated in Snowdonia honey and balsamic. It came with minted mash potato, cherry tomatoes, the whole thing paddling in a lamb stock leek sauce. It was just about perfect, the lamb meeting my loft expectations, so tender and flavorsome with just the right amount of fat. The tomatoes were exceptionally sweet and perhaps if I must quibble, then I would have just toned down the seasoning in the lamb stock, the over-zealous use of herbs threatening to overpower the main attraction. I shared a dish with Mrs. M, who ordered the hake with a Welsh rarebit crust, sauté potatoes, tomato ratatouille and pesto dressing. The hake from Conwy was generous in size, well cooked, perhaps the rarebit denuding the crispy coating that I always savor. I finished with a sticky toffee pudding that trod the line between hedonism and over-indulgence, the melted toffee fortunately not too sweet, which meant that it could be polished off with no problem apart from doubling my calorific intake for December.

The wine list is so-so. It's such a pity when so much care has obviously been taken in sourcing and cooking the meal, but so little effort has been made to source some decent vino. I shared a bottle of 2015 Muscadet-sur-Lie from Domaine de la Tormaline (my policy is always to opt for a white if none of the red wines appear promising). It was inoffensive and innocuous. We finished the bottle between two so it served its purpose, yet it was just a shame there is no noteworthy vinous fare that would do justice to the cooking.

Still overall, this was an excellent dinner. As long as the lamb delivered then I would depart contented and contented I departed. It might be the place where an oenophile might negotiate a corkage, which I would have done with more foresight. Nonetheless, if you want to taste what the best lamb in the world is like, then rather than forking out a fortune to taste it in London, go to Wales and relish its flavors in the place from where it comes.