As we near the end of another year, let us celebrate with a fine bottle of wine. Throughout the final days of 2017, we’ll be featuring our reviewers’ Best Of list.
Here, managing editor Joe Czerwinski’s top picks:

The 2015 vintage was hyped nearly from the beginning, and the wines are certainly excellent. It looks as if the 2016s will be even better when the top wines begin to trickle out next year.
98 2015 Château de Beaucastel Châteauneuf-du-Pape Hommage à Jacques Perrin
Tasted only a week after bottling, this was already singing when I tasted it at the winery in early September. With its elevated proportion of Mourvèdre, I wonder if it’s a look at the future of the appellation?
98 2015 Domaine de la Janasse Châteauneuf-du-Pape Cuvée Vieilles Vignes
It was a challenge to choose among all of the great 2015 CdPs, but not only was this tied for top spot, it can be found at retail for well under $100. There’s no dry tannin here, and no alcoholic heat, either.
97 2015 Clos des Papes Châteauneuf-du-Pape
Several other 2015s equalled this wine (measured strictly by the points), but I love the floral aromas and silkiness of the tannins here. On a more philosophical note, I applaud the approach of continuing to make a single estate wine, rather than bottling individual parcels separately.

The 2015s in the Northern Rhône represent a truly great vintage, so it was difficult to narrow the field to these three wines. To make things easier, I limited myself to choosing only bottled wines.
*The reviews for these wines will go live when Issue 234 is delivered at the end of the month, so they haven’t been published yet, but they’ve certainly been tasted.
100    2015 Domaine Rostaing Côte Rôtie La Côte Blonde
This just edged out the 2015 La Landonne at this address, but all of the 2015 Côte Rôties are amazing here, and only marginally better than the 2016s. Rostaing has never been better. 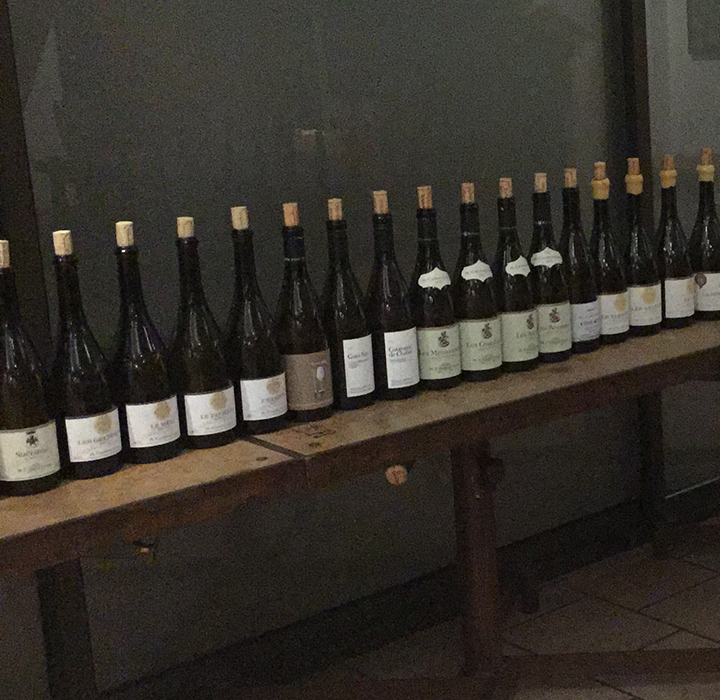 100     2015 M. Chapoutier Ermitage l’Ermite
My favorite of Chapoutier’s single-parcel bottlings, this wine melds the incredible power of the vintage to the indelible granite face of the terroir in an embrace of soulmates.
99+     2015 Delas Frères Hermitage les Bessards
This wine follows along in the theme of my previous selection, being an expression of the vintage that doesn’t overpower the equally powerful terroir. Once it sheds some tannin, I suspect it may reach that triple digit barrier.

Greatest Value Wines of the Year

Maybe someone who is better versed in navigating our database of reviews will correct me on these and point out higher-rated wines that sell for less, but these were three wines—all from the Southern Rhône—that stood out to me. All are under $25, and in one case, under $15.
92+ 2015 Domaine de l’Echevin Côtes du Rhône Villages Saint Maurice Guillaume de Rouville
A high-altitude Syrah-based cuvée from the Southern Rhône, this complex wine was a standout among hundreds of Côtes du Rhônes I tasted during my August-September trip. It should drink well through 2025.
92 2016 Château de Nages Costières de Nîmes JT Blanc
I had to put one white wine on my list! I haven’t seen this rich, decadent blend of Roussanne, Grenache Blanc and Viognier yet in the market, but the 2015 was $22, so this should be comfortably under our $25 threshold.
90 2016 Mas des Bressades Costières de Nîmes Cuvée Tradition Rouge
I rated this estate’s Cuvée Excellence Blanc a point higher, but as it sells for more, I picked the Tradition Rouge for the value category. Depending on the market, you should be able to find this for under $15.

The wine drinking experience often transcends the wine itself. I would say that’s almost always the case. For the experience to be special, there has to be something other than the quality of the wine in the glass to make it so.
2003 Domaine René Engel Clos Vougeot
After tasting this out of barrel in December 2004, I chased down a few bottles once it was released. It’s the only time I’ve actually done that, so expectations were high when I opened my first bottle this June. Thankfully, it delivered a terrific blend of dark cherry fruit and savory earth notes, supple tannins and a nonstop finish.
1999 Piero Busso Barbaresco Gallina
Italy reviewer Monica Larner and I reviewed this wine on release when we worked together years ago, so I chose to bring a magnum of it to our Matter of Taste New York City BYO dinner earlier this month. Neither of us had tasted it since, and it’s safe to say it was better than the 92 points we pegged it at back then, easily exceeding expectations in its delicate, silky swirls of tannin, rose petals and dried spices. 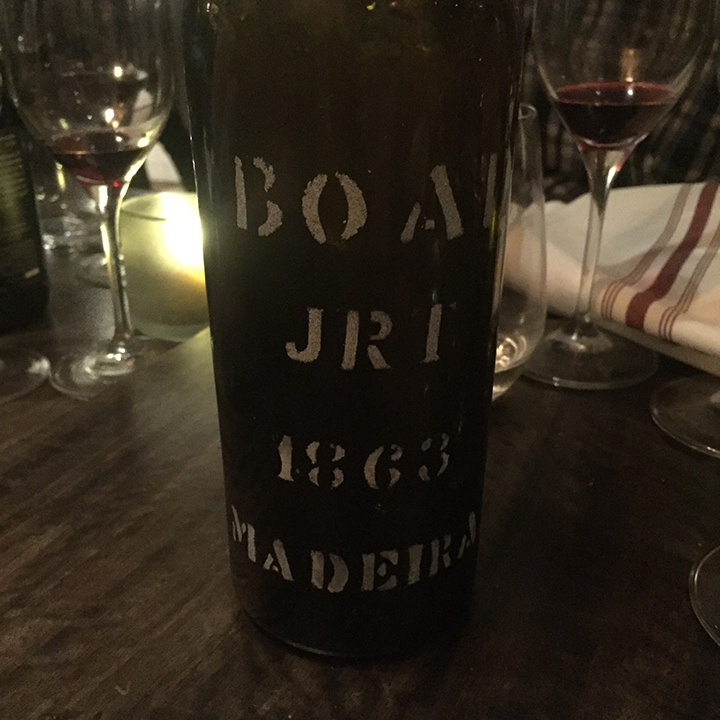 1863 JRT Boal Madeira
This surfaced at the end of a long night out with colleagues and various Spanish winemakers, and promptly slam-dunked over virtually everything that came before, with honourable mention going only to a white Rioja from 1950 and a magnum of 2008 Ganevat. So intense, so old, yet so full of life. Breathtaking to think it was born during the American Civil War.

Best Dinner of the Year

Maybe I was slacking, but I didn’t attend a lot of formal dinners at fancy restaurants this year. Despite Michelin investing in RPWA, I didn’t collect many stars. In any event, my most memorable and best dinners of the year revolved around the other guests at the table, not the pure wine-and-food experience.

By my wife’s reckoning, in the six weeks leading up to Thanksgiving, I was home for eight days. I flew back from Australia on the busiest travel day of the year so I could be home with my family. It was just the four of us (we have two sons), but with our oldest set to graduate college this month, it’s hard to know when/if we’ll ever be able to duplicate this. Plus, I didn’t have to do any of the prep work. “Just show up and carve the bird” is the kind of Thanksgiving dinner I could get used to! Since I was feeling sentimental, I pulled a couple of mature California wines from the cellar and we drank a 1997 Flowers Hirsch Vineyard Pinot Noir and a 1997 Araujo Cabernet Sauvignon. Great wines, great food and the best company I could ever ask for.

Best Vertical of the Year

Coming in at the halfway point of the year, this isn’t something I actively pursued. There’s something self-serving about asking owners and winemakers to part with library stocks for personal tasting, and most visits don’t allow time for going through all of the current releases, let alone going deep into the archives. That said…
Clonakilla Shiraz-Viognier 2006 – 2016
We skipped a few vintages, but this tasting was the highlight of my visit to Tim Kirk’s winery just outside Canberra. Subscribers will be able to read the full report in an upcoming issue, but suffice to say the wines evolve gracefully for 10-plus years and in many ways presaged the move toward medium-bodied, savory Shiraz styles.

Best Get-a-Life Outside of Wine Things

These will be old news to anyone who already follows along on Instagram or Facebook, but these are the year’s highlights. All work and no play makes Joe a dull boy.
Quick Family Vacation in Iceland
Last January, we got a package deal to visit Iceland. While we didn’t get to see the Aurora Borealis, which was a primary objective, it was still a great experience. The landscape is so different from what we’re used to in the Hudson Valley. We took in geysers, walked in a glacier—yes, in, not just on—and marveled at swimming outdoors in geothermal pools while the snow fell around us. And no wine for the duration. 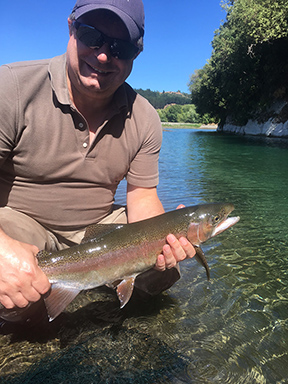 Personal Best Trout
I’ve been fly fishing avidly for the past few years, so it’s still a new hobby to me. While visiting Hawke’s Bay last February, I was able to get in a half-day of fly-fishing on the Ngaruroro River. With permission of a winery owner (to access the river) and the help of a local, we stalked fish in crystal-clear waters and I landed a solid five-pound rainbow that’s the largest I’ve caught to date.
Playing Ice Hockey with My Sister
We’ve both played hockey since the age of five, but since she’s four years younger than I am, we never played together growing up. This was only the second time we’ve been able to synchronize our schedules and play in a tournament on the same team. Between busy lives and creeping physical ailments, I don’t know how many more chances we’ll have to do this.

It’s with a great sense of privilege and responsibility that I write today as the incoming Editor-in-Chief of Robert Parker Wine Advocate.

It was difficult to narrow down my list of favorites to just five wines, and while I’ve taken availability into account when choosing them, don’t be discouraged if you can’t come up with exactly these bottles.